How do you pick the next stock to invest in? One way would be to spend hours of research browsing through thousands of publicly traded companies. However, an easier way is to look at the stocks that smart money investors are collectively bullish on. Hedge funds and other institutional investors usually invest large amounts of capital and have to conduct due diligence while choosing their next pick. They don’t always get it right, but, on average, their stock picks historically generated strong returns after adjusting for known risk factors. With this in mind, let’s take a look at the recent hedge fund activity surrounding National Grid plc (NYSE:NGG).

Is National Grid plc (NYSE:NGG) a good investment right now? The smart money is reducing their bets on the stock. The number of bullish hedge fund positions were trimmed by 2 lately. Our calculations also showed that ngg isn’t among the 30 most popular stocks among hedge funds. NGG was in 11 hedge funds’ portfolios at the end of the third quarter of 2018. There were 13 hedge funds in our database with NGG positions at the end of the previous quarter. 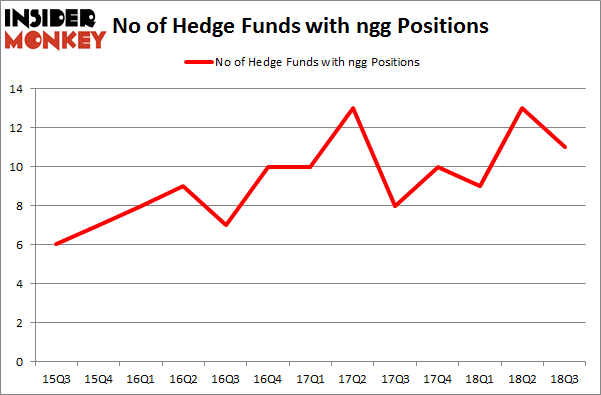 When looking at the institutional investors followed by Insider Monkey, Jim Simons’s Renaissance Technologies has the most valuable position in National Grid plc (NYSE:NGG), worth close to $201.6 million, accounting for 0.2% of its total 13F portfolio. Coming in second is D E Shaw, managed by D. E. Shaw, which holds a $22.2 million position; the fund has less than 0.1%% of its 13F portfolio invested in the stock. Remaining members of the smart money with similar optimism contain Israel Englander’s Millennium Management, Ken Griffin’s Citadel Investment Group and Dmitry Balyasny’s Balyasny Asset Management.

Because National Grid plc (NYSE:NGG) has witnessed declining sentiment from hedge fund managers, it’s easy to see that there lies a certain “tier” of hedge funds that slashed their entire stakes heading into Q3. Intriguingly, Peter Rathjens, Bruce Clarke and John Campbell’s Arrowstreet Capital dropped the largest stake of the 700 funds monitored by Insider Monkey, valued at about $40.9 million in stock, and Phill Gross and Robert Atchinson’s Adage Capital Management was right behind this move, as the fund dumped about $30.7 million worth. These moves are important to note, as total hedge fund interest dropped by 2 funds heading into Q3.

As you can see these stocks had an average of 35.5 hedge funds with bullish positions and the average amount invested in these stocks was $1.69 billion. That figure was $237 million in NGG’s case. ServiceNow Inc (NYSE:NOW) is the most popular stock in this table. On the other hand Public Storage (NYSE:PSA) is the least popular one with only 15 bullish hedge fund positions. Compared to these stocks National Grid plc (NYSE:NGG) is even less popular than PSA. Considering that hedge funds aren’t fond of this stock in relation to other companies analyzed in this article, it may be a good idea to analyze it in detail and understand why the smart money isn’t behind this stock. This isn’t necessarily bad news. Although it is possible that hedge funds may think the stock is overpriced and view the stock as a short candidate, they may not be very familiar with the bullish thesis. In either case more research is warranted.