Mylan N.V. (NASDAQ:MYL) was in 39 hedge funds’ portfolios at the end of the third quarter of 2018. MYL shareholders have witnessed a decrease in support from the world’s most elite money managers recently. There were 40 hedge funds in our database with MYL holdings at the end of the previous quarter. Our calculations also showed that MYL isn’t among the (30 most popular stocks among hedge funds).

Greenlight Capital’s David Einhorn shared his Mylan investment thesis in the 2016 Q4 investor letter. Here is what he said:

We initiated a position in Mylan (MYL), a global generic pharmaceuticals company. MYL shares fell 29% in the first three quarters of 2015 and over 45% from their mid-year highs after generics rival Teva abandoned a hostile takeover bid for the company. During the fall, the market became overly focused on a series of overhangs including potential earnings dilution from a proposed and ultimately failed buyout of Perrigo (a private-label OTC business); corporate governance concerns including an unusual takeover-defense mechanism; and widespread unease about the pharmaceutical sector amidst scrutiny of specialty pharmaceutical manufacturers like Valeant. We acknowledge eventual headwinds for the company’s branded EpiPen product, which could encounter competition from generics in late 2016. However, we see medium-term upside from a competitor recall, an announced share repurchase, and board review of corporate governance complaints. Ultimately, we expect MYL to earn close to $7 per share in 2018, driven by a robust pipeline of respiratory, injectable and biologic drugs and by further capital deployment including share repurchases. We initiated our position at an average price of $45.32, about 9x 2016 consensus EPS estimates. MYL shares ended the quarter at $54.07.

Einhorn was initially right about MYL but unfortunately the stock disappointed since then and currently trades at $33. Einhorn hasn’t really been right about anything in the last couple of years and we have been ignoring his long stock picks. In the financial world there are a large number of tools investors have at their disposal to grade stocks. A pair of the most under-the-radar tools are hedge fund and insider trading indicators. We have shown that, historically, those who follow the top picks of the best fund managers can outperform the broader indices by a solid amount. Insider Monkey’s flagship best performing hedge funds strategy returned 6.3% year to date (through December 3rd) and outperformed the market even though it draws its stock picks among small-cap stocks. This strategy also outperformed the market by 18 percentage points since its inception (see the details here). That’s why we believe hedge fund sentiment is a useful indicator that investors should pay attention to.

How have hedgies been trading Mylan N.V. (NASDAQ:MYL)? 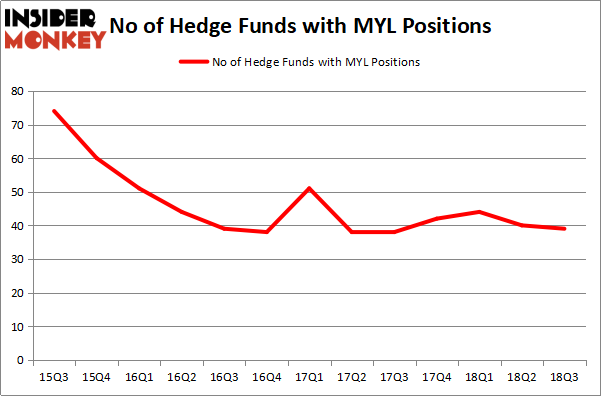 More specifically, Pzena Investment Management was the largest shareholder of Mylan N.V. (NASDAQ:MYL), with a stake worth $792.7 million reported as of the end of September. Trailing Pzena Investment Management was Paulson & Co, which amassed a stake valued at $421.1 million. First Pacific Advisors LLC, Citadel Investment Group, and OrbiMed Advisors were also very fond of the stock, giving the stock large weights in their portfolios.

Because Mylan N.V. (NASDAQ:MYL) has witnessed declining sentiment from the smart money, it’s easy to see that there is a sect of money managers that elected to cut their positions entirely by the end of the third quarter. It’s worth mentioning that David Einhorn’s Greenlight Capital sold off the biggest position of the “upper crust” of funds followed by Insider Monkey, worth about $247.9 million in stock, and Jim Simons’s Renaissance Technologies was right behind this move, as the fund dropped about $55.7 million worth. These moves are intriguing to say the least, as total hedge fund interest fell by 1 funds by the end of the third quarter.

As you can see these stocks had an average of 20.25 hedge funds with bullish positions and the average amount invested in these stocks was $544 million. That figure was $3250 million in MYL’s case. Check Point Software Technologies Ltd. (NASDAQ:CHKP) is the most popular stock in this table. On the other hand WPP plc (NYSE:WPP) is the least popular one with only 8 bullish hedge fund positions. Compared to these stocks Mylan N.V. (NASDAQ:MYL) is more popular among hedge funds.

Even though MYL is still very popular among hedge funds, the sentiment is turning negative. We’d rather invest in stocks that hedge funds are even more popular and have been adding to their holdings. In this regard we believe investors would be better off by buying some of the 30 most popular stocks among hedge funds.