Is Mitel Networks Corporation (NASDAQ:MITL) ready to rally soon? Hedge funds are becoming less confident. The number of bullish hedge fund positions decreased by 3 in recent months. Our calculations also showed that MITL isn’t among the 30 most popular stocks among hedge funds.

At the end of the third quarter, a total of 27 of the hedge funds tracked by Insider Monkey were long this stock, a change of -10% from the previous quarter. On the other hand, there were a total of 18 hedge funds with a bullish position in MITL at the beginning of this year. With hedge funds’ positions undergoing their usual ebb and flow, there exists a select group of notable hedge fund managers who were boosting their holdings considerably (or already accumulated large positions). 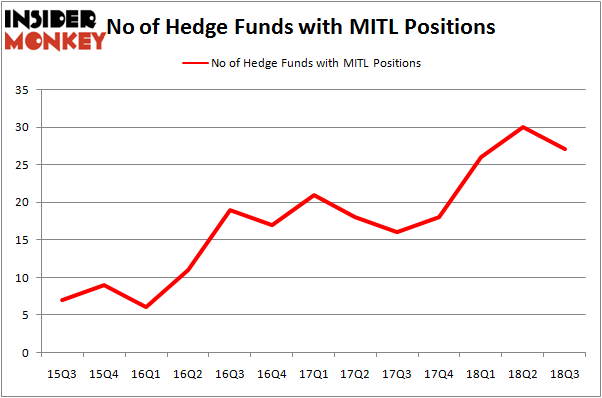 The largest stake in Mitel Networks Corporation (NASDAQ:MITL) was held by Alpine Associates, which reported holding $61.1 million worth of stock at the end of September. It was followed by GLG Partners with a $39.2 million position. Other investors bullish on the company included Paulson & Co, P2 Capital Partners, and Glazer Capital.

Due to the fact that Mitel Networks Corporation (NASDAQ:MITL) has faced a decline in interest from the aggregate hedge fund industry, logic holds that there was a specific group of hedgies that slashed their positions entirely last quarter. Interestingly, Simon Davies’s Sand Grove Capital Partners dropped the largest stake of all the hedgies watched by Insider Monkey, valued at about $98 million in stock, and Adam Fox and Samuel Elder’s Altalis Capital Partners was right behind this move, as the fund dumped about $2.6 million worth. These transactions are important to note, as total hedge fund interest fell by 3 funds last quarter.

As you can see these stocks had an average of 11.25 hedge funds with bullish positions and the average amount invested in these stocks was $161 million. That figure was $306 million in MITL’s case. CSG Systems International, Inc. (NASDAQ:CSGS) is the most popular stock in this table. On the other hand DBV Technologies S.A. (NASDAQ:DBVT) is the least popular one with only 9 bullish hedge fund positions. Compared to these stocks Mitel Networks Corporation (NASDAQ:MITL) is more popular among hedge funds. Considering that hedge funds are fond of this stock in relation to its market cap peers, it may be a good idea to analyze it in detail and potentially include it in your portfolio.