The elite funds run by legendary investors such as Dan Loeb and David Tepper make hundreds of millions of dollars for themselves and their investors by spending enormous resources doing research on small cap stocks that big investment banks don’t follow. Because of their pay structures, they have strong incentive to do the research necessary to beat the market. That’s why we pay close attention to what they think in small cap stocks. In this article, we take a closer look at McDonald’s Corporation (NYSE:MCD) from the perspective of those elite funds.

In the eyes of most stock holders, hedge funds are viewed as underperforming, outdated investment vehicles of years past. While there are over 8000 funds with their doors open today, Our experts choose to focus on the masters of this group, approximately 700 funds. These money managers preside over most of all hedge funds’ total capital, and by observing their first-class equity investments, Insider Monkey has found a number of investment strategies that have historically outrun Mr. Market. Insider Monkey’s flagship hedge fund strategy surpassed the S&P 500 index by 6 percentage points per annum since its inception in May 2014 through early November 2018. We were able to generate large returns even by identifying short candidates. Our portfolio of short stocks lost 26.1% since February 2017 even though the market was up nearly 19% during the same period. We just shared a list of 11 short targets in our latest quarterly update.

The American fast food company reported strong third-quarter earnings, with revenues coming in at $5.37 billion and earnings at $2.10 per share. McDonald’s logged low guest counts at its U.S. locations, despite posting healthy increases in overseas markets.

Despite this, the burger giant was able to record a comps gain of 2.4% in the country, prompted by higher average check drove sales, due to affirmative product mix shifts, price increases in the menu, and online initiatives. The company’s long-term aim is for 95% of McDonald’s establishments to be franchisee-owned. This strategy has succeeded in lowering costs for the burger giant, leading to better margins and earnings.

The last major insider share purchase came at the hands of board member John J. Mulligan, who purchased 1,600 shares at $128.94. With the stock trading at $188.51, as of this writing, it was certainly a lucrative purchase for Mulligan.

What does the smart money think about McDonald’s Corporation (NYSE:MCD)?

At Q3’s end, a total of 38 of the hedge funds tracked by Insider Monkey were long this stock, a change of -14% from the previous quarter. Below, you can check out the change in hedge fund sentiment towards MCD over the last 13 quarters. With the smart money’s positions undergoing their usual ebb and flow, there exists an “upper tier” of key hedge fund managers who were upping their holdings considerably (or already accumulated large positions). 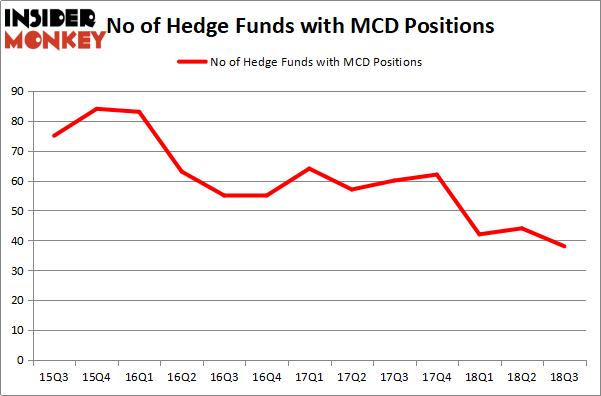 Due to the fact that McDonald’s Corporation (NYSE:MCD) has witnessed falling interest from the aggregate hedge fund industry, logic holds that there is a sect of fund managers who were dropping their full holdings heading into Q3. At the top of the heap, Jim Simons’s Renaissance Technologies cut the largest investment of the 700 funds monitored by Insider Monkey, totaling close to $77.7 million in stock. Alexander Mitchell’s fund, Scopus Asset Management, also said goodbye to its stock, about $47 million worth. These bearish behaviors are interesting, as total hedge fund interest dropped by 6 funds heading into Q3.

As you can see these stocks had an average of 43.75 hedge funds with bullish positions and the average amount invested in these stocks was $1851 million. That figure was $1161 million in MCD’s case. Abbott Laboratories (NYSE:ABT) is the most popular stock in this table. On the other hand 3M Co (NYSE:MMM) is the least popular one with only 34 bullish hedge fund positions. McDonald’s Corporation (NYSE:MCD) is not the least popular stock in this group but hedge fund interest is still below average. This is a slightly negative signal and we’d rather spend our time researching stocks that hedge funds are piling on. In this regard ABT might be a better candidate to consider a long position.