Is Kansas City Southern (NYSE:KSU) a buy, sell, or hold? Investors who are in the know are reducing their bets on the stock. The number of bullish hedge fund positions decreased by 2 recently. Our calculations also showed that KSU isn’t among the 30 most popular stocks among hedge funds. KSU was in 24 hedge funds’ portfolios at the end of the third quarter of 2018. There were 26 hedge funds in our database with KSU holdings at the end of the previous quarter.

What have hedge funds been doing with Kansas City Southern (NYSE:KSU)?

At the end of the third quarter, a total of 24 of the hedge funds tracked by Insider Monkey held long positions in this stock, a change of -8% from one quarter earlier. The graph below displays the number of hedge funds with bullish position in KSU over the last 13 quarters. With hedgies’ sentiment swirling, there exists an “upper tier” of notable hedge fund managers who were increasing their holdings considerably (or already accumulated large positions). 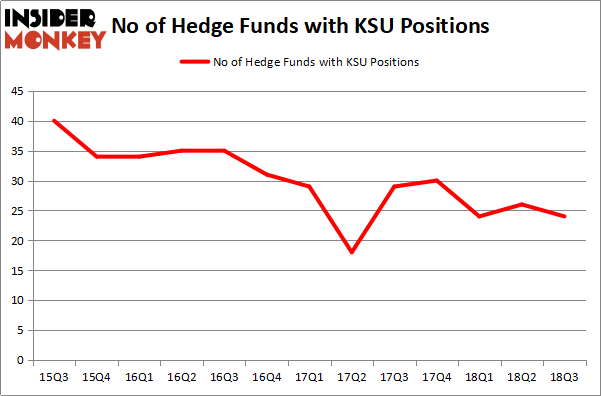 Of the funds tracked by Insider Monkey, Eric W. Mandelblatt and Gaurav Kapadia’s Soroban Capital Partners has the biggest call position in Kansas City Southern (NYSE:KSU), worth close to $113.3 million, corresponding to 1.7% of its total 13F portfolio. The second most bullish fund manager is Cliff Asness of AQR Capital Management, with a $60.1 million position; 0.1% of its 13F portfolio is allocated to the company. Some other hedge funds and institutional investors that are bullish contain John Brennan’s Sirios Capital Management, Phill Gross and Robert Atchinson’s Adage Capital Management and D. E. Shaw’s D E Shaw.

Due to the fact that Kansas City Southern (NYSE:KSU) has experienced declining sentiment from the smart money, it’s safe to say that there were a few funds that slashed their entire stakes by the end of the third quarter. Intriguingly, Israel Englander’s Millennium Management dropped the biggest position of the “upper crust” of funds tracked by Insider Monkey, comprising close to $31.8 million in stock. Brandon Haley’s fund, Holocene Advisors, also dumped its stock, about $12.7 million worth. These transactions are intriguing to say the least, as aggregate hedge fund interest fell by 2 funds by the end of the third quarter.

As you can see these stocks had an average of 21 hedge funds with bullish positions and the average amount invested in these stocks was $640 million. That figure was $364 million in KSU’s case. Martin Marietta Materials, Inc. (NYSE:MLM) is the most popular stock in this table. On the other hand Braskem SA (NYSE:BAK) is the least popular one with only 13 bullish hedge fund positions. Kansas City Southern (NYSE:KSU) is not the most popular stock in this group but hedge fund interest is still above average. This is a slightly positive signal but we’d rather spend our time researching stocks that hedge funds are piling on. In this regard MLM might be a better candidate to consider a long position.