Is Interface, Inc. (NASDAQ:TILE) ready to rally soon? Investors who are in the know are taking a bearish view. The number of long hedge fund bets retreated by 1 recently. Our calculations also showed that TILE isn’t among the 30 most popular stocks among hedge funds. TILE was in 17 hedge funds’ portfolios at the end of the third quarter of 2018. There were 18 hedge funds in our database with TILE holdings at the end of the previous quarter.

What does the smart money think about Interface, Inc. (NASDAQ:TILE)? 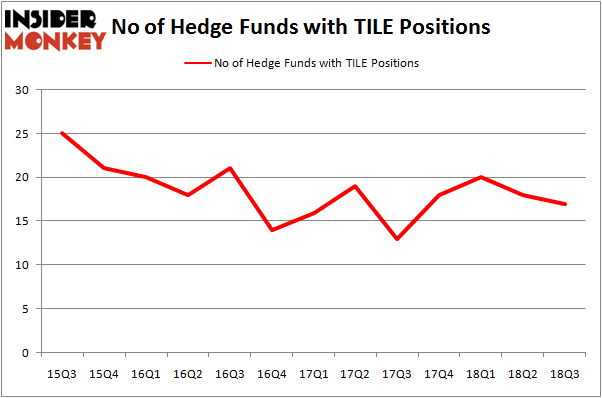 Among these funds, Ariel Investments held the most valuable stake in Interface, Inc. (NASDAQ:TILE), which was worth $26.2 million at the end of the third quarter. On the second spot was Balyasny Asset Management which amassed $14.4 million worth of shares. Moreover, GLG Partners, AQR Capital Management, and Royce & Associates were also bullish on Interface, Inc. (NASDAQ:TILE), allocating a large percentage of their portfolios to this stock.

Because Interface, Inc. (NASDAQ:TILE) has faced bearish sentiment from the smart money, logic holds that there lies a certain “tier” of funds who sold off their entire stakes in the third quarter. Intriguingly, Benjamin A. Smith’s Laurion Capital Management sold off the biggest investment of the “upper crust” of funds monitored by Insider Monkey, valued at close to $0.9 million in stock, and John Overdeck and David Siegel’s Two Sigma Advisors was right behind this move, as the fund cut about $0.7 million worth. These transactions are intriguing to say the least, as aggregate hedge fund interest was cut by 1 funds in the third quarter.

Let’s also examine hedge fund activity in other stocks – not necessarily in the same industry as Interface, Inc. (NASDAQ:TILE) but similarly valued. We will take a look at Kite Realty Group Trust (NYSE:KRG), The Liberty Braves Group (NASDAQ:BATRK), TriMas Corp (NASDAQ:TRS), and The Liberty Braves Group (NASDAQ:BATRA). This group of stocks’ market caps are similar to TILE’s market cap.

As you can see these stocks had an average of 15.75 hedge funds with bullish positions and the average amount invested in these stocks was $162 million. That figure was $97 million in TILE’s case. The Liberty Braves Group (NASDAQ:BATRK) is the most popular stock in this table. On the other hand The Liberty Braves Group (NASDAQ:BATRA) is the least popular one with only 8 bullish hedge fund positions. Interface, Inc. (NASDAQ:TILE) is not the most popular stock in this group but hedge fund interest is still above average. This is a slightly positive signal but we’d rather spend our time researching stocks that hedge funds are piling on. In this regard BATRK might be a better candidate to consider a long position.