Is Hanmi Financial Corp (NASDAQ:HAFC) a bargain? Investors who are in the know are selling. The number of long hedge fund bets fell by 1 in recent months. Our calculations also showed that HAFC isn’t among the 30 most popular stocks among hedge funds. HAFC was in 12 hedge funds’ portfolios at the end of the third quarter of 2018. There were 13 hedge funds in our database with HAFC holdings at the end of the previous quarter.

At Q3’s end, a total of 12 of the hedge funds tracked by Insider Monkey held long positions in this stock, a change of -8% from the second quarter of 2018. Below, you can check out the change in hedge fund sentiment towards HAFC over the last 13 quarters. So, let’s review which hedge funds were among the top holders of the stock and which hedge funds were making big moves. 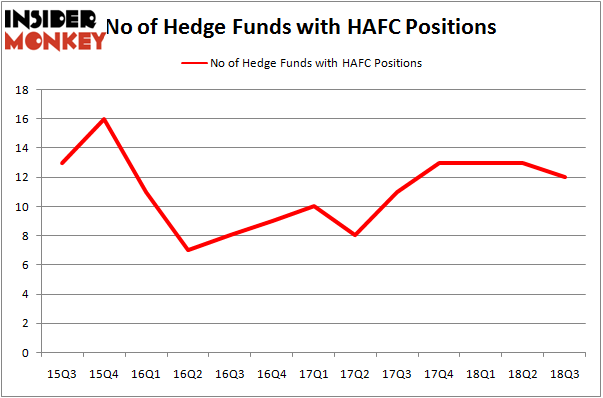 Of the funds tracked by Insider Monkey, Jim Simons’s Renaissance Technologies has the number one position in Hanmi Financial Corp (NASDAQ:HAFC), worth close to $24.3 million, corresponding to less than 0.1%% of its total 13F portfolio. Sitting at the No. 2 spot is Millennium Management, led by Israel Englander, holding a $9.5 million position; the fund has less than 0.1%% of its 13F portfolio invested in the stock. Other members of the smart money with similar optimism include Cliff Asness’s AQR Capital Management, D. E. Shaw’s D E Shaw and Ken Griffin’s Citadel Investment Group.

We view hedge fund activity in the stock unfavorable, but in this case there was only a single hedge fund selling its entire position: BlueCrest Capital Mgmt.. One hedge fund selling its entire position doesn’t always imply a bearish intent. Theoretically a hedge fund may decide to sell a promising position in order to invest the proceeds in a more promising idea. However, we don’t think this is the case in this case because none of the 700+ hedge funds tracked by Insider Monkey identified HAFC as a viable investment and initiated a position in the stock.

As you can see these stocks had an average of 14.25 hedge funds with bullish positions and the average amount invested in these stocks was $126 million. That figure was $55 million in HAFC’s case. Radius Health Inc (NASDAQ:RDUS) is the most popular stock in this table. On the other hand John B. Sanfilippo & Son, Inc. (NASDAQ:JBSS) is the least popular one with only 8 bullish hedge fund positions. Hanmi Financial Corp (NASDAQ:HAFC) is not the least popular stock in this group but hedge fund interest is still below average. This is a slightly negative signal and we’d rather spend our time researching stocks that hedge funds are piling on. In this regard RDUS might be a better candidate to consider a long position.