Is Green Brick Partners Inc (NASDAQ:GRBK) ready to rally soon? Investors who are in the know are taking a pessimistic view. The number of long hedge fund positions shrunk by 2 recently. Our calculations also showed that grbk isn’t among the 30 most popular stocks among hedge funds.

How have hedgies been trading Green Brick Partners Inc (NASDAQ:GRBK)?

Heading into the fourth quarter of 2018, a total of 15 of the hedge funds tracked by Insider Monkey were bullish on this stock, a change of -12% from one quarter earlier. On the other hand, there were a total of 8 hedge funds with a bullish position in GRBK at the beginning of this year. With the smart money’s positions undergoing their usual ebb and flow, there exists a few notable hedge fund managers who were boosting their stakes substantially (or already accumulated large positions). 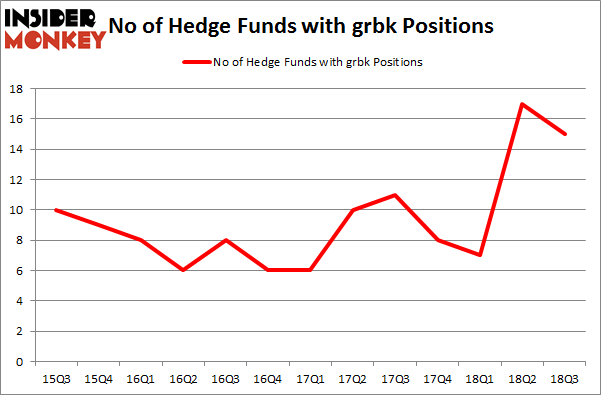 More specifically, Greenlight Capital was the largest shareholder of Green Brick Partners Inc (NASDAQ:GRBK), with a stake worth $243.6 million reported as of the end of September. Trailing Greenlight Capital was Ariel Investments, which amassed a stake valued at $21.4 million. Birch Run Capital, AWH Capital, and Stadium Capital Management were also very fond of the stock, giving the stock large weights in their portfolios.

Because Green Brick Partners Inc (NASDAQ:GRBK) has experienced declining sentiment from hedge fund managers, logic holds that there were a few fund managers that slashed their entire stakes last quarter. At the top of the heap, Ken Griffin’s Citadel Investment Group dropped the largest position of the “upper crust” of funds followed by Insider Monkey, valued at close to $6.5 million in stock, and David Rodriguez-Fraile’s BlueMar Capital Management was right behind this move, as the fund sold off about $1.4 million worth. These moves are interesting, as aggregate hedge fund interest was cut by 2 funds last quarter.

As you can see these stocks had an average of 6 hedge funds with bullish positions and the average amount invested in these stocks was $37 million. That figure was $299 million in GRBK’s case. The First Bancshares, Inc. (MS) (NASDAQ:FBMS) is the most popular stock in this table. On the other hand NexPoint Strategic Opportunities Fund (NYSE:NHF) is the least popular one with only 5 bullish hedge fund positions. Compared to these stocks Green Brick Partners Inc (NASDAQ:GRBK) is more popular among hedge funds. Considering that hedge funds are fond of this stock in relation to its market cap peers, it may be a good idea to analyze it in detail and potentially include it in your portfolio.