Hedge funds and large money managers usually invest with a focus on the long-term horizon and, therefore, short-lived dips or bumps on the charts usually don’t make them change their opinion towards a company. This time it may be different. The coronavirus pandemic destroyed the high correlations among major industries and asset classes. We are now in a stock pickers market where fundamentals of a stock have more effect on the price than the overall direction of the market. As a result we observe sudden and large changes in hedge fund positions depending on the news flow. Let’s take a look at the hedge fund sentiment towards Genpact Limited (NYSE:G) to find out whether there were any major changes in hedge funds’ views.

At Insider Monkey, we scour multiple sources to uncover the next great investment idea. For example, Chuck Schumer recently stated that marijuana legalization will be a Senate priority. So, we are checking out this under the radar stock that will benefit from this. We go through lists like the 10 best battery stocks to pick the next Tesla that will deliver a 10x return. Even though we recommend positions in only a tiny fraction of the companies we analyze, we check out as many stocks as we can. We read hedge fund investor letters and listen to stock pitches at hedge fund conferences. You can subscribe to our free daily newsletter on our homepage. With all of this in mind we’re going to analyze the key hedge fund action regarding Genpact Limited (NYSE:G).

Do Hedge Funds Think G Is A Good Stock To Buy Now? 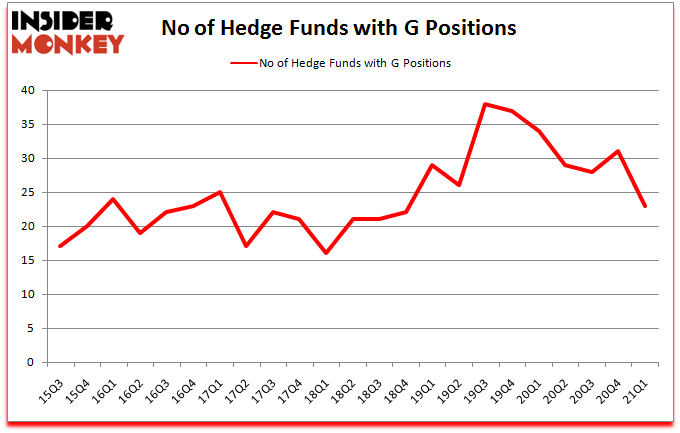 The largest stake in Genpact Limited (NYSE:G) was held by Arrowstreet Capital, which reported holding $83.2 million worth of stock at the end of December. It was followed by Two Sigma Advisors with a $34.6 million position. Other investors bullish on the company included D E Shaw, Millennium Management, and Pzena Investment Management. In terms of the portfolio weights assigned to each position Dalton Investments allocated the biggest weight to Genpact Limited (NYSE:G), around 10.08% of its 13F portfolio. Old Well Partners is also relatively very bullish on the stock, setting aside 2.83 percent of its 13F equity portfolio to G.

Seeing as Genpact Limited (NYSE:G) has witnessed bearish sentiment from hedge fund managers, logic holds that there were a few hedgies that elected to cut their positions entirely by the end of the first quarter. At the top of the heap, Anand Parekh’s Alyeska Investment Group dumped the biggest stake of all the hedgies monitored by Insider Monkey, totaling about $27.8 million in stock. Vikas Lunia’s fund, Lunia Capital, also said goodbye to its stock, about $6.7 million worth. These bearish behaviors are intriguing to say the least, as aggregate hedge fund interest was cut by 8 funds by the end of the first quarter.

As you can see these stocks had an average of 25.7 hedge funds with bullish positions and the average amount invested in these stocks was $500 million. That figure was $272 million in G’s case. Voya Financial Inc (NYSE:VOYA) is the most popular stock in this table. On the other hand Casey’s General Stores, Inc. (NASDAQ:CASY) is the least popular one with only 11 bullish hedge fund positions. Genpact Limited (NYSE:G) is not the least popular stock in this group but hedge fund interest is still below average. Our overall hedge fund sentiment score for G is 34.5. Stocks with higher number of hedge fund positions relative to other stocks as well as relative to their historical range receive a higher sentiment score. Our calculations showed that top 5 most popular stocks among hedge funds returned 95.8% in 2019 and 2020, and outperformed the S&P 500 ETF (SPY) by 40 percentage points. These stocks gained 23.8% in 2021 through July 16th and beat the market by 7.7 percentage points. A small number of hedge funds were also right about betting on G, though not to the same extent, as the stock returned 12.2% since the end of Q1 (through July 16th) and outperformed the market.

Is G A Good Investment Right Now?Is G A Good Stock To Buy?NYSE:GSentiment Score Between 30 and 40Yahoo Finance