Concerns over rising interest rates and expected further rate increases have hit several stocks hard since the end of the third quarter. NASDAQ and Russell 2000 indices are already in correction territory. More importantly, Russell 2000 ETF (IWM) underperformed the larger S&P 500 ETF (SPY) by about 4 percentage points in the first half of the fourth quarter. Hedge funds and institutional investors tracked by Insider Monkey usually invest a disproportionate amount of their portfolios in smaller cap stocks. We have been receiving indications that hedge funds were paring back their overall exposure and this is one of the factors behind the recent movements in major indices. In this article, we will take a closer look at hedge fund sentiment towards Colony Capital Inc (NYSE:CLNY).

Is Colony Capital Inc (NYSE:CLNY) undervalued? Prominent investors are selling. The number of bullish hedge fund positions were cut by 3 recently. Our calculations also showed that CLNY isn’t among the 30 most popular stocks among hedge funds. CLNY was in 25 hedge funds’ portfolios at the end of September. There were 28 hedge funds in our database with CLNY holdings at the end of the previous quarter.

Carmel Capital Partners offered their opinion on Colony Capital and its affiliates and subsidiaries in a quarterly letter to its shareholders. We bring you a snippet from that report:

“CLNS was formed in January 2017 through a tri-merger of three entities: Colony Capital, NorthStar Asset Management (NSAM), and NorthStar Realty Finance (NRF), with Colony Capital’s management taking over reins at the new entity. Prior to the merger, CLNS had a complex entity structure, and the merger was going to further add to this problem. However, our initial thesis was driven by management’s plan to simplify its capital structure (post-merger) by shedding ‘non-core’ assets and greatly simplifying the business. This is a similar plan successfully executed by another one of our holdings, Brookfield Asset Management.

Simplifying the business model would allow investors to see the true underlying strength of CLNS’ assets and thus reward the company with a higher valuation.

Unfortunately, we woke on March 1st to the surprise news that CLNS had reduced its dividend by 60%, from $1.08 to $0.44. In our subsequent calls with management, three points became clear, one of the entities CLNS acquired had overstated its ability to raise new capital, a portion of the assets acquired had been incorrectly valued at the time of the merger, and management had simply bitten off far more than they could chew. The result being, in the near-term, two-thirds of the business will not produce the cash flows previously expected, and thus the dividend reset was necessary.

So why do we continue to own the stock? At the current price of $6, the stock price is trading below our worst- case net-asset-value of $7. The dividend reset to $0.44/share is a conservative baseline that we believe offers an attractive runway to grow in the high single digits over the medium-term. We believe that management’s recent blunders should not overshadow what is otherwise a solid long-term track record – deployed $11bn of capital at a weighted average IRR of 19% since 2009. Thus, if management can properly execute on its original plan of simplifying the business model, successfully raise external capital, we expect the market to reward the company a higher stock price.”

Our readers will be interested to know that Richard B. Saltzman, Ceo & President at Colony Capital, was responsible for the last major insider purchase of the company’s common stock, snapping up 75,000 shares at $16.50 apiece in 2016. The shares presently trade for 5.63, as of this writing, so the purchase was not exactly a lucrative one for the executive.

How have hedgies been trading Colony Capital Inc (NYSE:CLNY)?

At the end of the third quarter, a total of 25 of the hedge funds tracked by Insider Monkey were long this stock, a change of -11% from one quarter earlier. The graph below displays the number of hedge funds with a bullish position in CLNY over the last 13 quarters. With hedge funds’ positions undergoing their usual ebb and flow, there exist a few key hedge fund managers who were increasing their holdings significantly (or already accumulated large positions). 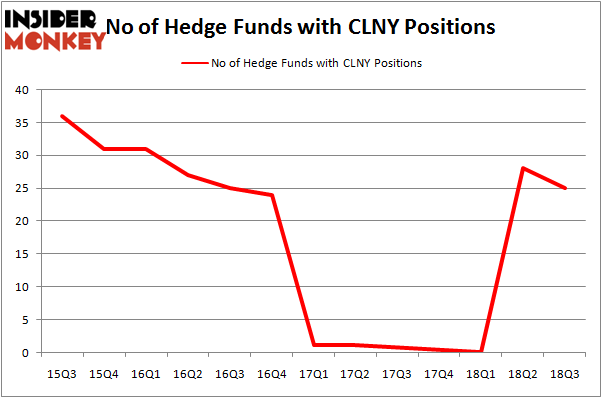 More specifically, Baupost Group was the largest shareholder of Colony Capital Inc (NYSE:CLNY), with a stake worth $302.6 million reported as of the end of September. Trailing Baupost Group was Tensile Capital, which amassed a stake valued at $29.7 million. Odey Asset Management Group, D E Shaw, and HBK Investments were also very fond of the stock, giving the stock large weights in their portfolios.

Due to the fact that Colony Capital Inc (NYSE:CLNY) has experienced falling interest from hedge fund managers, it’s safe to say that there lies a certain “tier” of money managers that elected to cut their entire stakes last quarter. It’s worth mentioning that Michael Blitzer’s Kingstown Capital Management sold off the biggest investment of all the hedgies followed by Insider Monkey, totaling about $18.7 million in stock, and Kenneth Tropin’s Graham Capital Management was right behind this move, as the fund said goodbye to about $11.4 million worth. These transactions are intriguing, to say the least, as total hedge fund interest was cut by 3 funds last quarter.

Let’s now take a look at hedge fund activity in other stocks – not necessarily in the same industry as Colony Capital Inc (NYSE:CLNY) but similarly valued. We will take a look at Owens-Illinois Inc (NYSE:OI), AllianceBernstein Holding LP (NYSE:AB), Ascendis Pharma A/S (NASDAQ:ASND), and EnLink Midstream LLC (NYSE:ENLC). All of these stocks’ market caps are closest to CLNY’s market cap.

As you can see these stocks had an average of 15.75 hedge funds with bullish positions and the average amount invested in these stocks was $474 million. That figure was $433 million in CLNY’s case. Ascendis Pharma A/S (NASDAQ:ASND) is the most popular stock in this table. On the other hand, AllianceBernstein Holding LP (NYSE:AB) is the least popular one with only 6 bullish hedge fund positions. Colony Capital Inc (NYSE:CLNY) is not the most popular stock in this group but hedge fund interest is still above average. This is a slightly positive signal but we’d rather spend our time researching stocks that hedge funds are piling on. In this regard, ASND might be a better candidate to consider a long position.