We can judge whether Vale S.A. (NYSE:VALE) is a good investment right now by following the lead of some of the best investors in the world and piggybacking their ideas. There’s no better way to get these firms’ immense resources and analytical capabilities working for us than to follow their lead into their best ideas. While not all of these picks will be winners, research shows that these picks historically outperformed the market when we factor in known risk factors.

Hedge funds have been buying Vale S.A. (NYSE:VALE) over the past two quarters following a sharp decline in hedge fund ownership of the stock during the first-quarter of this year. One of 25 Dividend Stocks that Billionaire Ken Fisher is Bullish On, the miner is one of several that Fisher Investments has purchased in the last year. After first buying shares of Vale in Q3 2017, Fisher more than doubled its stake in Q3 2018, buying nearly 17.8 million shares, which sport a dividend yield of 3.40%.

In the 21st century investor’s toolkit there are a lot of gauges stock market investors have at their disposal to size up stocks. A duo of the most innovative gauges are hedge fund and insider trading moves. Our researchers have shown that, historically, those who follow the top picks of the best investment managers can trounce the S&P 500 by a significant amount (see the details here).

Heading into the fourth quarter of 2018, a total of 35 of the hedge funds tracked by Insider Monkey held long positions in this stock, a 9% uptick from the previous quarter. Below, you can check out the change in hedge fund sentiment towards VALE over the last 13 quarters. With hedgies’ sentiment swirling, there exists an “upper tier” of key hedge fund managers who were adding to their stakes substantially (or already accumulated large positions). 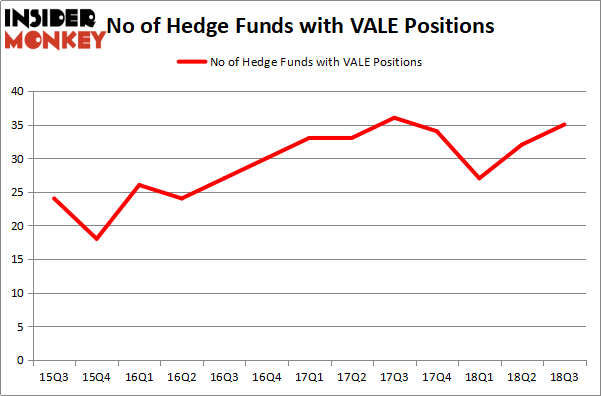 With general bullishness amongst the heavyweights, specific money managers were breaking ground themselves. Impala Asset Management, managed by Robert Bishop, established the biggest position in Vale S.A. (NYSE:VALE). Impala Asset Management had $72.7 million invested in the company at the end of the quarter. Steve Cohen’s Point72 Asset Management also made a $13.5 million investment in the stock during the quarter. The other funds with brand new VALE positions are Jorge Paulo Lemann’s 3G Capital, David Kowitz and Sheldon Kasowitz’s Indus Capital, and Sara Nainzadeh’s Centenus Global Management.

As you can see these stocks had an average of 48 hedge funds with bullish positions and the average amount invested in these stocks was $3.26 billion. That figure was $2.59 billion in VALE’s case. Charter Communications, Inc. (NASDAQ:CHTR) is the most popular stock in this table. On the other hand Starbucks Corporation (NASDAQ:SBUX) is the least popular one with only 33 bullish hedge fund positions. Vale S.A. (NYSE:VALE) is not the least popular stock in this group but hedge fund interest is still below average. This is a slightly negative signal and we’d rather spend our time researching stocks that hedge funds are piling on, like CHTR.