Many investors, including Paul Tudor Jones or Stan Druckenmiller, have been saying for a while now that the current market is overvalued due to a low interest rate environment that leads to companies swapping their equity for debt and focusing mostly on short-term performance such as beating the quarterly earnings estimates. In the fourth quarter, many investors lost money due to unpredictable events such as the sudden increase in long-term interest rates and unintended consequences of the trade war with China. Nevertheless, many of the stocks that tanked in the third quarter still sport strong fundamentals and their decline was more related to the general market sentiment rather than their individual performance and hedge funds kept their bullish stance. In this article we will find out how hedge fund sentiment to WEC Energy Group, Inc. (NYSE:WEC) changed recently.

Is WEC Energy Group, Inc. (NYSE:WEC) ready to rally soon? The smart money is becoming hopeful. The number of long hedge fund positions went up by 4 recently. Our calculations also showed that wec isn’t among the 30 most popular stocks among hedge funds.

What does the smart money think about WEC Energy Group, Inc. (NYSE:WEC)? 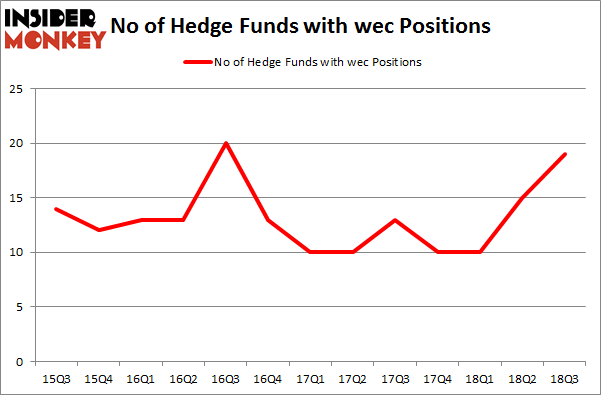 More specifically, Renaissance Technologies was the largest shareholder of WEC Energy Group, Inc. (NYSE:WEC), with a stake worth $258.6 million reported as of the end of September. Trailing Renaissance Technologies was AQR Capital Management, which amassed a stake valued at $53 million. Citadel Investment Group, Millennium Management, and Carlson Capital were also very fond of the stock, giving the stock large weights in their portfolios.

As you can see these stocks had an average of 29 hedge funds with bullish positions and the average amount invested in these stocks was $791 million. That figure was $358 million in WEC’s case. KeyCorp (NYSE:KEY) is the most popular stock in this table. On the other hand Hormel Foods Corporation (NYSE:HRL) is the least popular one with only 12 bullish hedge fund positions. WEC Energy Group, Inc. (NYSE:WEC) is not the least popular stock in this group but hedge fund interest is still below average. This is a slightly negative signal and we’d rather spend our time researching stocks that hedge funds are piling on. In this regard KEY might be a better candidate to consider a long position.

Is Ferro Corporation (FOE) Going to Burn These Hedge Funds?
Monthly Newsletter Strategy
Download a free copy of our newsletter and see the details inside!
Hedge Fund Resource Center
Related News
Five Consistent Dividend Payers Raising Distributions To Shareholders Is WEC Energy Group Inc (WEC) A Good Stock To Buy Right Now? Which Is the Better Valuation Metric? The P/E Ratio or the PEG Ratio: Part 1 Louis Navellier Increases Exposure to These Five Utilities Stocks Hedge Funds Were Selling These 10 Mid-Caps In Q3, Part 1 Hedge Funds Dumped These Surging Stocks During Q3 DTE Energy Co (DTE): Hedge Funds Are Bullish and Insiders Are Undecided, What Should You Do? 11 Countries With The Worst Modern Music In The World The Top 5 Robo Advisor Apps of 2018 Five Reasons You Need a Day-Trading Mentor
Billionaire Hedge Funds