The latest 13F reporting period has come and gone, and Insider Monkey is again at the forefront when it comes to making use of this gold mine of data. We have processed the filings of the more than 700 world-class investment firms that we track and now have access to the collective wisdom contained in these filings, which are based on their September 30 holdings, data that is available nowhere else. Should you consider Whiting Petroleum Corporation (NYSE:WLL) for your portfolio? We’ll look to this invaluable collective wisdom for the answer.

Whiting Petroleum Corporation (NYSE:WLL) was in 39 hedge funds’ portfolios at the end of the third quarter of 2018. WLL has seen an increase in hedge fund interest recently. There were 32 hedge funds in our database with WLL positions at the end of the previous quarter. Our calculations also showed that Wll isn’t among the 30 most popular stocks among hedge funds.

What have hedge funds been doing with Whiting Petroleum Corporation (NYSE:WLL)?

At the end of the third quarter, a total of 39 of the hedge funds tracked by Insider Monkey were bullish on this stock, a change of 22% from the previous quarter. Below, you can check out the change in hedge fund sentiment towards WLL over the last 13 quarters. With hedge funds’ capital changing hands, there exists a select group of noteworthy hedge fund managers who were upping their holdings significantly (or already accumulated large positions). 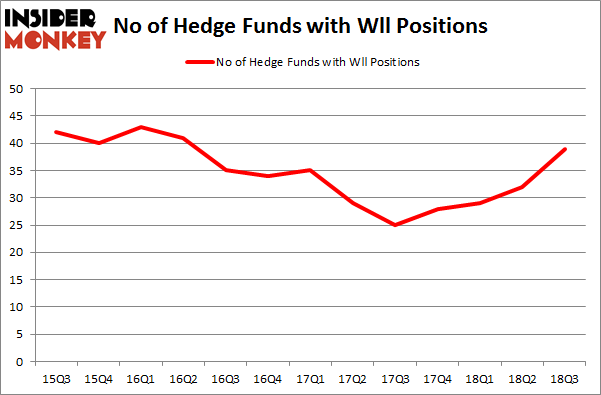 When looking at the institutional investors followed by Insider Monkey, PAR Capital Management, managed by Paul Reeder and Edward Shapiro, holds the largest position in Whiting Petroleum Corporation (NYSE:WLL). PAR Capital Management has a $170.7 million position in the stock, comprising 2% of its 13F portfolio. On PAR Capital Management’s heels is Fine Capital Partners, managed by Debra Fine, which holds a $145.9 million position; 18.4% of its 13F portfolio is allocated to the company. Some other professional money managers with similar optimism consist of Thomas E. Claugus’s GMT Capital, David Cohen and Harold Levy’s Iridian Asset Management and Jim Simons’s Renaissance Technologies.

As aggregate interest increased, some big names were leading the bulls’ herd. GMT Capital, managed by Thomas E. Claugus, established the most valuable position in Whiting Petroleum Corporation (NYSE:WLL). GMT Capital had $104.8 million invested in the company at the end of the quarter. Vince Maddi and Shawn Brennan’s SIR Capital Management also made a $38.2 million investment in the stock during the quarter. The following funds were also among the new WLL investors: Anand Parekh’s Alyeska Investment Group, Ken Heebner’s Capital Growth Management, and Ed Bosek’s BeaconLight Capital.