It is already common knowledge that individual investors do not usually have the necessary resources and abilities to properly research an investment opportunity. As a result, most investors pick their illusory “winners” by making a superficial analysis and research that leads to poor performance on aggregate. Since stock returns aren’t usually symmetrically distributed and index returns are more affected by a few outlier stocks (i.e. the FAANG stocks dominating and driving S&P 500 Index’s returns in recent years), more than 50% of the constituents of the Standard and Poor’s 500 Index underperform the benchmark. Hence, if you randomly pick a stock, there is more than 50% chance that you’d fail to beat the market. At the same time, the 30 most favored S&P 500 stocks by the hedge funds monitored by Insider Monkey generated a return of 15.1% over the last 12 months (vs. 5.6% gain for SPY), with 53% of these stocks outperforming the benchmark. Of course, hedge funds do make wrong bets on some occasions and these get disproportionately publicized on financial media, but piggybacking their moves can beat the broader market on average. That’s why we are going to go over recent hedge fund activity in Weyerhaeuser Company (NYSE:WY).

Weyerhaeuser Company (NYSE:WY) investors should be aware of an increase in hedge fund interest lately. WY was in 35 hedge funds’ portfolios at the end of the third quarter of 2018, which is by 7 more than in the previous quarter. Still, with 35 investors long the stock, the company was not one of the 30 most popular stocks among hedge funds in Q3 of 2018.

As reported in First Eagle Global Value Team’s Q3 Commentary -“Weyerhaeuser shares declined in response to the quarter’s rise in interest rates. The company’s 4% dividend yield had been attractive to yield-seeking investors, but with Treasury rates rising, their appeal was reduced. Because higher interest rates can slow housing sector activity, they also contributed to weaker lumber prices.”

To most market participants, hedge funds are assumed to be slow, old investment tools of yesteryear. While there are greater than 8000 funds trading today, Our experts look at the leaders of this club, around 700 funds. Most estimates calculate that this group of people oversee bulk of the hedge fund industry’s total asset base, and by monitoring their first-class investments, Insider Monkey has spotted a few investment strategies that have historically outperformed the market. Insider Monkey’s flagship hedge fund strategy outperformed the S&P 500 index by 6 percentage points a year since its inception in May 2014 through early November 2018. We were able to generate large returns even by identifying short candidates. Our portfolio of short stocks lost 26.1% since February 2017 even though the market was up nearly 19% during the same period. We just shared a list of 11 short targets in our latest quarterly update.

What have hedge funds been doing with Weyerhaeuser Company (NYSE:WY)?

At Q3’s end, a total of 35 of the hedge funds tracked by Insider Monkey were long this stock, a change of 25% from the previous quarter. Below, you can check out the change in hedge fund sentiment towards WY over the last 13 quarters. With hedge funds’ positions undergoing their usual ebb and flow, there exists an “upper tier” of key hedge fund managers who were upping their stakes meaningfully (or already accumulated large positions). 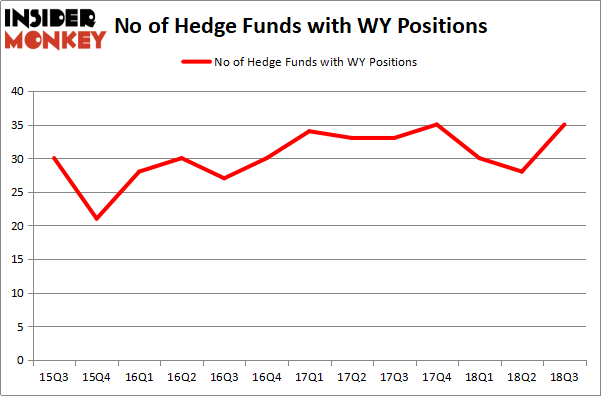 Among these funds, Millennium Management held the most valuable stake in Weyerhaeuser Company (NYSE:WY), which was worth $176.6 million at the end of the third quarter. On the second spot was Third Avenue Management which amassed $151.2 million worth of shares. Moreover, Two Sigma Advisors, Renaissance Technologies, and Adage Capital Management were also bullish on Weyerhaeuser Company (NYSE:WY), allocating a large percentage of their portfolios to this stock.

Consequently, some big names were breaking ground themselves. Marshall Wace LLP, managed by Paul Marshall and Ian Wace, established the most valuable position in Weyerhaeuser Company (NYSE:WY). Marshall Wace LLP had $17.5 million invested in the company at the end of the quarter. Ian Simm’s Impax Asset Management also made a $3.5 million investment in the stock during the quarter. The other funds with new positions in the stock are Jeffrey Pierce’s Snow Park Capital Partners, Alec Litowitz and Ross Laser’s Magnetar Capital, and J. Alan Reid, Jr.’s Forward Management.

As you can see these stocks had an average of 20 hedge funds with bullish positions and the average amount invested in these stocks was $509 million. That figure was $649 million in WY’s case. Parker-Hannifin Corporation (NYSE:PH) is the most popular stock in this table. On the other hand Sasol Limited (NYSE:SSL) is the least popular one with only 7 bullish hedge fund positions. Compared to these stocks Weyerhaeuser Company (NYSE:WY) is more popular among hedge funds. Considering that hedge funds are fond of this stock in relation to its market cap peers, it may be a good idea to analyze it in detail and potentially include it in your portfolio.