Hedge Funds Are Crazy About The Scotts Miracle-Gro Company (SMG)

While the market driven by short-term sentiment influenced by uncertainty regarding the future of the interest rate environment in the US, declining oil prices and the trade war with China, many smart money investors are keeping their optimism regarding the current bull run, while still hedging many of their long positions. However, as we know, big investors usually buy stocks with strong fundamentals, which is why we believe we can profit from imitating them. In this article, we are going to take a look at the smart money sentiment surrounding The Scotts Miracle-Gro Company (NYSE:SMG).

The Scotts Miracle-Gro Company (NYSE:SMG) was in 23 hedge funds’ portfolios at the end of September. SMG investors should pay attention to an increase in enthusiasm from smart money recently. There were 21 hedge funds in our database with SMG holdings at the end of the previous quarter. Our calculations also showed that SMG isn’t among the 30 most popular stocks among hedge funds.

How are hedge funds trading The Scotts Miracle-Gro Company (NYSE:SMG)?

At Q3’s end, a total of 23 of the hedge funds tracked by Insider Monkey held long positions in this stock, a change of 10% from one quarter earlier. Below, you can check out the change in hedge fund sentiment towards SMG over the last 13 quarters. With the smart money’s positions undergoing their usual ebb and flow, there exists an “upper tier” of key hedge fund managers who were increasing their holdings meaningfully (or already accumulated large positions). 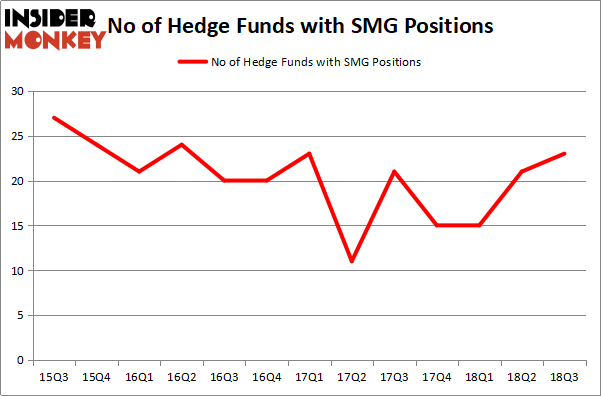 Among these funds, Fisher Asset Management held the most valuable stake in The Scotts Miracle-Gro Company (NYSE:SMG), which was worth $115.5 million at the end of the third quarter. On the second spot was Renaissance Technologies which amassed $36.8 million worth of shares. Moreover, Bridger Management, Alyeska Investment Group, and Water Street Capital were also bullish on The Scotts Miracle-Gro Company (NYSE:SMG), allocating a large percentage of their portfolios to this stock.

As aggregate interest increased, specific money managers have been driving this bullishness. Renaissance Technologies, managed by Jim Simons, created the biggest position in The Scotts Miracle-Gro Company (NYSE:SMG). Renaissance Technologies had $36.8 million invested in the company at the end of the quarter. John Overdeck and David Siegel’s Two Sigma Advisors also initiated a $0.9 million position during the quarter. The other funds with new positions in the stock are Michael Platt and William Reeves’s BlueCrest Capital Mgmt., Paul Tudor Jones’s Tudor Investment Corp, and Frederick DiSanto’s Ancora Advisors.

As you can see these stocks had an average of 24.5 hedge funds with bullish positions and the average amount invested in these stocks was $850 million. That figure was $281 million in SMG’s case. Peabody Energy Corporation (NYSE:BTU) is the most popular stock in this table. On the other hand Seaboard Corporation (NYSEAMEX:SEB) is the least popular one with only 9 bullish hedge fund positions. The Scotts Miracle-Gro Company (NYSE:SMG) is not the least popular stock in this group but hedge fund interest is still below average. This is a slightly negative signal and we’d rather spend our time researching stocks that hedge funds are piling on. In this regard BTU might be a better candidate to consider a long position.