The New York Times Company (NYSE:NYT) was in 34 hedge funds’ portfolios at the end of September. NYT has experienced an increase in activity from the world’s largest hedge funds in recent months, as there were 28 smart money investors from Inside Monkey’s database with long holdings of the stock in the previous quarter. Still, 34 shareholders wasn’t enough for it to be placed among 30 most popular stocks among hedge funds in Q3 of 2018. On the other side, even though the stock was not one of the favorites during the third quarter, considering that it is slowly building up is net of investors, we are going to analyze it furthermore.

To the average investor there are plenty of methods market participants put to use to analyze publicly traded companies. A duo of the less known methods are hedge fund and insider trading interest. Our researchers have shown that, historically, those who follow the best picks of the best hedge fund managers can outpace the S&P 500 by a very impressive amount (see the details here).

SoMa Equity Partners’ Gil Simon shares his positive views on The New York Times Company (NYSE:NYT) at the recent Sohn conference held in San Francisco (more details you can find on CNBC). As reported on CNBC, Gill noted a huge progress in the business model of news, adding that the New York Times Company is the leader of it. He further added that “newspapers are mostly dead, but the news isn’t dead” indicating the need for this new business model, which, to make things even more appealing, depends on consistent revenue base (similarly as in those various music streaming services). Another important data is that The New York Times Company’s stock gained 34% this year, compared to S&P 500’s 1.2% loss. 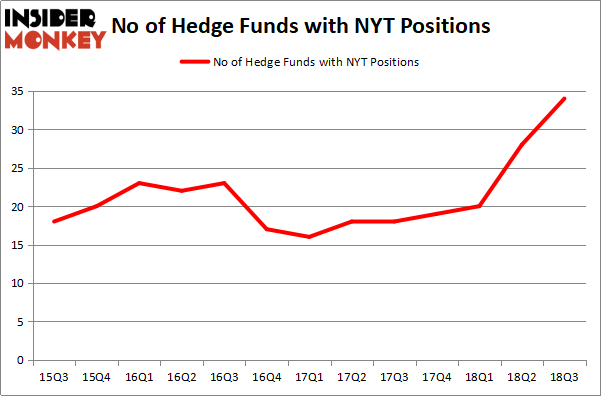 Among these funds, Darsana Capital Partners held the most valuable stake in The New York Times Company (NYSE:NYT), which was worth $347.3 million at the end of the third quarter. On the second spot was OZ Management which amassed $145.9 million worth of shares. Moreover, SoMa Equity Partners, Slate Path Capital, and Shannon River Fund Management were also bullish on The New York Times Company (NYSE:NYT), allocating a large percentage of their portfolios to this stock.

As one would reasonably expect, some big names have jumped into The New York Times Company (NYSE:NYT) headfirst. Black-and-White Capital, managed by Seth Wunder, initiated the most outsized position in The New York Times Company (NYSE:NYT). Black-and-White Capital had $15.3 million invested in the company at the end of the quarter. Andrew Feldstein and Stephen Siderow’s Blue Mountain Capital also initiated a $6.8 million position during the quarter. The other funds with new positions in the stock are Steve Cohen’s Point72 Asset Management, Brad Farber’s Atika Capital, and Mark N. Diker’s Diker Management.

As you can see these stocks had an average of 16 hedge funds with bullish positions and the average amount invested in these stocks was $941 million. That figure was $898 million in NYT’s case. Navistar International Corporation (NYSE:NAV) is the most popular stock in this table. On the other hand Chemical Financial Corporation (NASDAQ:CHFC) is the least popular one with only 8 bullish hedge fund positions. Compared to these stocks The New York Times Company (NYSE:NYT) is more popular among hedge funds. Considering that hedge funds are fond of this stock in relation to its market cap peers, it may be a good idea to analyze it in detail and potentially include it in your portfolio.