After several tireless days we have finished crunching the numbers from the more than 700 13F filings issued by the elite hedge funds and other investment firms that we track at Insider Monkey, which disclosed those firms’ equity portfolios as of September 30. The results of that effort will be put on display in this article, as we share valuable insight into the smart money sentiment towards TCF Financial Corporation (NYSE:TCF).

TCF Financial Corporation (NYSE:TCF) was in 24 hedge funds’ portfolios at the end of the third quarter of 2018. TCF investors should pay attention to an increase in support from the world’s most elite money managers lately. There were 15 hedge funds in our database with TCF holdings at the end of the previous quarter. Our calculations also showed that TCF isn’t among the 30 most popular stocks among hedge funds. 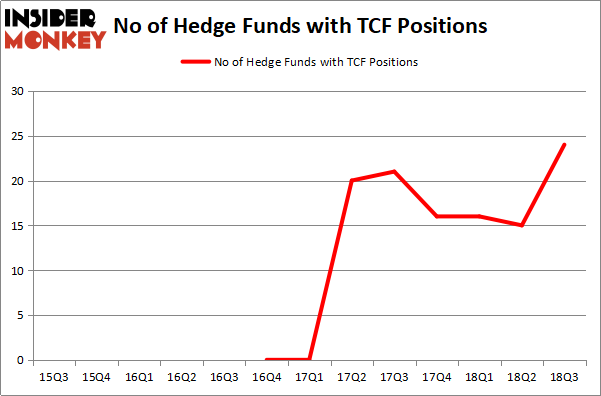 Among these funds, Balyasny Asset Management held the most valuable stake in TCF Financial Corporation (NYSE:TCF), which was worth $66.5 million at the end of the third quarter. On the second spot was Azora Capital which amassed $63.7 million worth of shares. Moreover, Millennium Management, Pzena Investment Management, and AQR Capital Management were also bullish on TCF Financial Corporation (NYSE:TCF), allocating a large percentage of their portfolios to this stock.

With a general bullishness amongst the heavyweights, key hedge funds were leading the bulls’ herd. Renaissance Technologies, managed by Jim Simons, established the most valuable position in TCF Financial Corporation (NYSE:TCF). Renaissance Technologies had $1.3 million invested in the company at the end of the quarter. Matthew Tewksbury’s Stevens Capital Management also initiated a $0.9 million position during the quarter. The other funds with brand new TCF positions are David Costen Haley’s HBK Investments, George Zweig, Shane Haas and Ravi Chander’s Signition LP, and Brandon Haley’s Holocene Advisors.

As you can see these stocks had an average of 12.25 hedge funds with bullish positions and the average amount invested in these stocks was $93 million. That figure was $308 million in TCF’s case. Amedisys Inc (NASDAQ:AMED) is the most popular stock in this table. On the other hand iShares MSCI All Country Asia ex Jpn ETF (NASDAQ:AAXJ) is the least popular one with only 1 bullish hedge fund positions. Compared to these stocks TCF Financial Corporation (NYSE:TCF) is more popular among hedge funds. Considering that hedge funds are fond of this stock in relation to its market cap peers, it may be a good idea to analyze it in detail and potentially include it in your portfolio.