At Insider Monkey, we pore over the filings of more than 700 top investment firms every quarter, a process we have now completed for the latest reporting period. The data we’ve gathered as a result gives us access to a wealth of collective knowledge based on these firms’ portfolio holdings as of September 30. In this article, we will use that wealth of knowledge to determine whether or not Steven Madden, Ltd. (NASDAQ:SHOO) makes for a good investment right now.

Steven Madden, Ltd. (NASDAQ:SHOO) was in 15 hedge funds’ portfolios at the end of September. SHOO has seen an increase in support from the world’s most elite money managers recently. There were 13 hedge funds in our database with SHOO holdings at the end of the previous quarter. Our calculations also showed that shoo isn’t among the 30 most popular stocks among hedge funds. 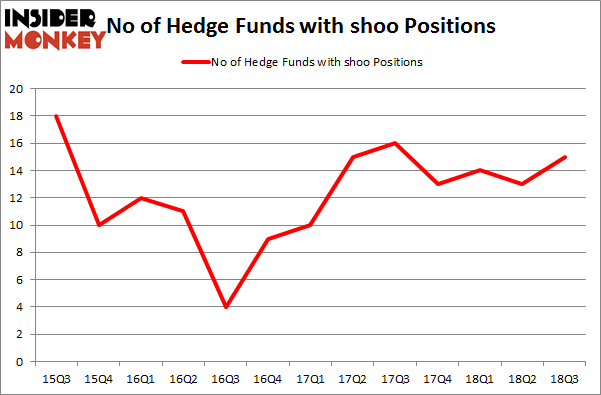 More specifically, Marshall Wace LLP was the largest shareholder of Steven Madden, Ltd. (NASDAQ:SHOO), with a stake worth $19.9 million reported as of the end of September. Trailing Marshall Wace LLP was Two Sigma Advisors, which amassed a stake valued at $14.5 million. Royce & Associates, D E Shaw, and GLG Partners were also very fond of the stock, giving the stock large weights in their portfolios.

As one would reasonably expect, some big names have jumped into Steven Madden, Ltd. (NASDAQ:SHOO) headfirst. Marshall Wace LLP, managed by Paul Marshall and Ian Wace, created the biggest position in Steven Madden, Ltd. (NASDAQ:SHOO). Marshall Wace LLP had $19.9 million invested in the company at the end of the quarter. Ken Griffin’s Citadel Investment Group also made a $2.4 million investment in the stock during the quarter. The other funds with brand new SHOO positions are Brandon Haley’s Holocene Advisors, Peter Rathjens, Bruce Clarke and John Campbell’s Arrowstreet Capital, and Matthew Tewksbury’s Stevens Capital Management.

As you can see these stocks had an average of 31.75 hedge funds with bullish positions and the average amount invested in these stocks was $716 million. That figure was $80 million in SHOO’s case. Coupa Software Incorporated (NYSE:COUP) is the most popular stock in this table. On the other hand Carter’s, Inc. (NYSE:CRI) is the least popular one with only 26 bullish hedge fund positions. Compared to these stocks Steven Madden, Ltd. (NASDAQ:SHOO) is even less popular than CRI. Considering that hedge funds aren’t fond of this stock in relation to other companies analyzed in this article, it may be a good idea to analyze it in detail and understand why the smart money isn’t behind this stock. This isn’t necessarily bad news. Although it is possible that hedge funds may think the stock is overpriced and view the stock as a short candidate, they may not be very familiar with the bullish thesis. In either case more research is warranted.