The fourth quarter was a rough one for most investors, as fears of a rising interest rate environment in the U.S, a trade war with China, and a more or less stagnant Europe, weighed heavily on the minds of investors. Both the S&P 500 and Russell 2000 sank as a result, with the Russell 2000, which is composed of smaller companies, being hit especially hard. This was primarily due to hedge funds, which are big supporters of small-cap stocks, pulling some of their capital out of the volatile markets during this time. Let’s look at how this market volatility affected the sentiment of hedge funds towards Servicesource International Inc (NASDAQ:SREV), and what that likely means for the prospects of the company and its stock.

Is Servicesource International Inc (NASDAQ:SREV) worth your attention right now? Money managers are becoming more confident. The number of bullish hedge fund bets rose by 3 recently. Our calculations also showed that SREV isn’t among the 30 most popular stocks among hedge funds.

What does the smart money think about Servicesource International Inc (NASDAQ:SREV)?

At the end of the third quarter, a total of 16 of the hedge funds tracked by Insider Monkey were bullish on this stock, a change of 23% from the second quarter of 2018. The graph below displays the number of hedge funds with bullish position in SREV over the last 13 quarters. With the smart money’s positions undergoing their usual ebb and flow, there exists a few noteworthy hedge fund managers who were adding to their holdings considerably (or already accumulated large positions). 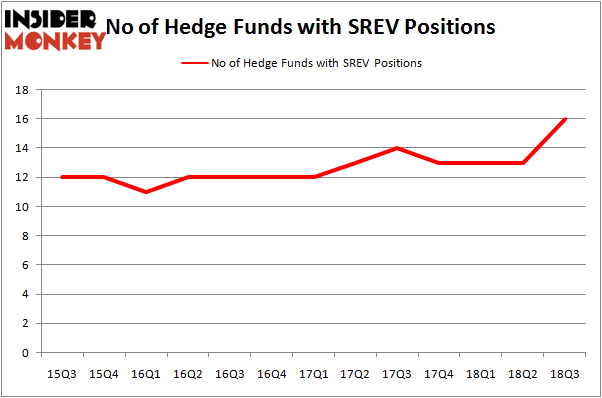 More specifically, RGM Capital was the largest shareholder of Servicesource International Inc (NASDAQ:SREV), with a stake worth $19.2 million reported as of the end of September. Trailing RGM Capital was Harvest Capital Strategies, which amassed a stake valued at $17.1 million. Renaissance Technologies, Cannell Capital, and Prescott Group Capital Management were also very fond of the stock, giving the stock large weights in their portfolios.

As one would reasonably expect, some big names were breaking ground themselves. Headlands Capital, managed by David Park, initiated the most outsized position in Servicesource International Inc (NASDAQ:SREV). Headlands Capital had $1.9 million invested in the company at the end of the quarter. Paul Marshall and Ian Wace’s Marshall Wace LLP also initiated a $1.1 million position during the quarter.

Let’s go over hedge fund activity in other stocks – not necessarily in the same industry as Servicesource International Inc (NASDAQ:SREV) but similarly valued. We will take a look at Civista Bancshares, Inc. (NASDAQ:CIVB), ACNB Corporation (NASDAQ:ACNB), Bel Fuse, Inc. (NASDAQ:BELFA), and Energous Corporation (NASDAQ:WATT). This group of stocks’ market values are closest to SREV’s market value.

As you can see these stocks had an average of 4.5 hedge funds with bullish positions and the average amount invested in these stocks was $12 million. That figure was $73 million in SREV’s case. Civista Bancshares, Inc. (NASDAQ:CIVB) is the most popular stock in this table. On the other hand ACNB Corporation (NASDAQ:ACNB) is the least popular one with only 1 bullish hedge fund positions. Compared to these stocks Servicesource International Inc (NASDAQ:SREV) is more popular among hedge funds. Considering that hedge funds are fond of this stock in relation to its market cap peers, it may be a good idea to analyze it in detail and potentially include it in your portfolio.