Hedge funds and large money managers usually invest with a focus on the long-term horizon and, therefore, short-lived dips on the charts, usually don’t make them change their opinion towards a company. The second half of 2015 and the first few months of this year was a stressful period for hedge funds. However, things have been taking a turn for the better in the second half of this year. Small-cap stocks which hedge funds are usually overweight outperformed the market by double digits and it may be a good time to pay attention to hedge funds’ picks before it is too late. In this article we are going to analyze the hedge fund sentiment towards Pinnacle West Capital Corporation (NYSE:PNW) to find out whether it was one of their high conviction long-term ideas.

Is Pinnacle West Capital Corporation (NYSE:PNW) worth your attention right now? Prominent investors are in an optimistic mood. The number of long hedge fund bets that are revealed through the 13F filings strengthened by 1 recently. There were 19 hedge funds in our database with PNW holdings at the end of the previous quarter. The level and the change in hedge fund popularity aren’t the only variables you need to analyze to decipher hedge funds’ perspectives. A stock may witness a boost in popularity but it may still be less popular than similarly priced stocks. That’s why at the end of this article we will examine companies such as Tesoro Corporation (NYSE:TSO), Expeditors International of Washington (NASDAQ:EXPD), and Albemarle Corporation (NYSE:ALB) to gather more data points. 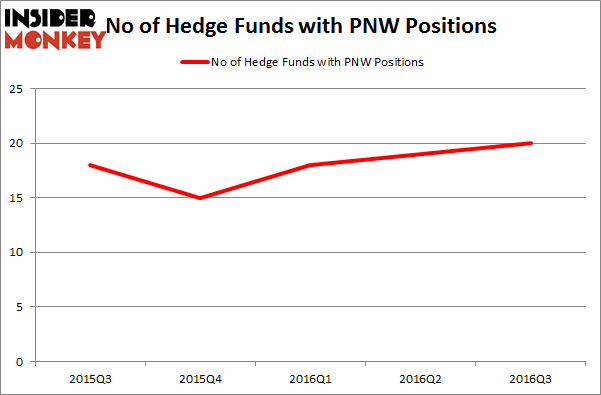 According to publicly available hedge fund and institutional investor holdings data compiled by Insider Monkey, Israel Englander’s Millennium Management has the largest position in Pinnacle West Capital Corporation (NYSE:PNW), worth close to $263.5 million. The second most bullish fund manager is AQR Capital Management, led by Cliff Asness, holding a $260.3 million position. Some other peers with similar optimism comprise Dmitry Balyasny’s Balyasny Asset Management, Clint Carlson’s Carlson Capital and Jim Simons’ Renaissance Technologies. We should note that none of these hedge funds are among our list of the 100 best performing hedge funds which is based on the performance of their 13F long positions in non-microcap stocks.