Is Olin Corporation (NYSE:OLN) a good equity to bet on right now? We like to check what the smart money thinks first before doing extensive research. Although there have been several high profile failed hedge fund picks, the consensus picks among hedge fund investors have historically outperformed the market after adjusting for known risk attributes. It’s not surprising given that hedge funds have access to better information and more resources to find the latest market-moving information.

Is Olin Corporation (NYSE:OLN) worth your attention right now? Investors who are in the know are becoming hopeful. The number of long hedge fund bets rose by 2 in recent months. Our calculations also showed that OLN isn’t among the 30 most popular stocks among hedge funds.

We’re going to take a look at the fresh hedge fund action regarding Olin Corporation (NYSE:OLN).

What does the smart money think about Olin Corporation (NYSE:OLN)?

Heading into the fourth quarter of 2018, a total of 27 of the hedge funds tracked by Insider Monkey held long positions in this stock, a change of 8% from one quarter earlier. Below, you can check out the change in hedge fund sentiment towards OLN over the last 13 quarters. With hedgies’ positions undergoing their usual ebb and flow, there exists an “upper tier” of notable hedge fund managers who were adding to their holdings considerably (or already accumulated large positions). 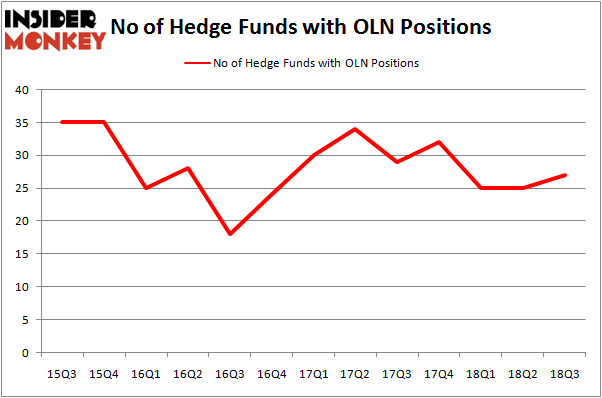 Of the funds tracked by Insider Monkey, Adage Capital Management, managed by Phill Gross and Robert Atchinson, holds the most valuable position in Olin Corporation (NYSE:OLN). Adage Capital Management has a $269.4 million position in the stock, comprising 0.6% of its 13F portfolio. The second most bullish fund manager is Michael Lowenstein of Kensico Capital, with a $214.1 million position; the fund has 3.5% of its 13F portfolio invested in the stock. Other professional money managers that are bullish contain Andreas Halvorsen’s Viking Global, Israel Englander’s Millennium Management and Cliff Asness’s AQR Capital Management.

Now, key hedge funds have been driving this bullishness. Scopus Asset Management, managed by Alexander Mitchell, assembled the largest call position in Olin Corporation (NYSE:OLN). Scopus Asset Management had $7.7 million invested in the company at the end of the quarter. Steve Cohen’s Point72 Asset Management also made a $6.3 million investment in the stock during the quarter. The following funds were also among the new OLN investors: Louis Bacon’s Moore Global Investments, Jim Simons’s Renaissance Technologies, and Israel Englander’s Millennium Management.

Let’s now take a look at hedge fund activity in other stocks – not necessarily in the same industry as Olin Corporation (NYSE:OLN) but similarly valued. We will take a look at Stitch Fix, Inc. (NASDAQ:SFIX), Ingevity Corporation (NYSE:NGVT), Turquoise Hill Resources Ltd (NYSE:TRQ), and MongoDB, Inc. (NASDAQ:MDB). This group of stocks’ market values are closest to OLN’s market value.

As you can see these stocks had an average of 19.75 hedge funds with bullish positions and the average amount invested in these stocks was $532 million. That figure was $983 million in OLN’s case. Stitch Fix, Inc. (NASDAQ:SFIX) is the most popular stock in this table. On the other hand Turquoise Hill Resources Ltd (NYSE:TRQ) is the least popular one with only 18 bullish hedge fund positions. Compared to these stocks Olin Corporation (NYSE:OLN) is more popular among hedge funds. Considering that hedge funds are fond of this stock in relation to its market cap peers, it may be a good idea to analyze it in detail and potentially include it in your portfolio.