The 700+ hedge funds and money managers tracked by Insider Monkey have already compiled and submitted their 13F filings for the second quarter, which unveil their equity positions as of September 30. We went through these filings, fixed typos and other more significant errors and identified the changes in hedge fund positions. Our extensive review of these public filings is finally over, so this article is set to reveal the smart money sentiment towards Nutanix, Inc. (NASDAQ:NTNX).

Nutanix, Inc. (NASDAQ:NTNX) has seen an increase in activity from the world’s largest hedge funds in recent months. NTNX was in 39 hedge funds’ portfolios at the end of September. There were 34 hedge funds in our database with NTNX positions at the end of the previous quarter. Our calculations also showed that NTNX isn’t among the 30 most popular stocks among hedge funds.

Heading into the fourth quarter of 2018, a total of 39 of the hedge funds tracked by Insider Monkey were bullish on this stock, a change of 15% from one quarter earlier. The graph below displays the number of hedge funds with bullish position in NTNX over the last 13 quarters. So, let’s find out which hedge funds were among the top holders of the stock and which hedge funds were making big moves. 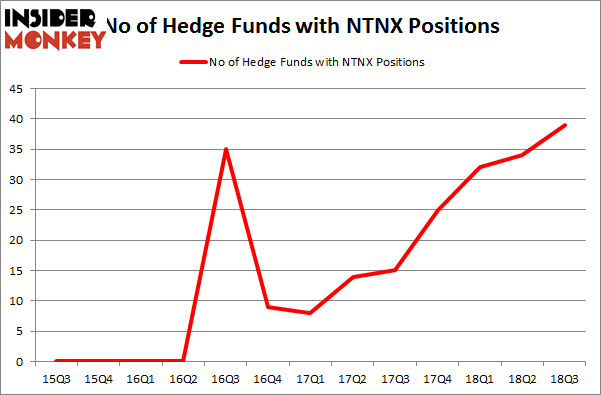 When looking at the institutional investors followed by Insider Monkey, D E Shaw, managed by D. E. Shaw, holds the biggest position in Nutanix, Inc. (NASDAQ:NTNX). D E Shaw has a $135.7 million position in the stock, comprising 0.2% of its 13F portfolio. The second largest stake is held by Renaissance Technologies, led by Jim Simons, holding a $100.2 million position; the fund has 0.1% of its 13F portfolio invested in the stock. Other hedge funds and institutional investors that are bullish include Dennis Puri and Oliver Keller’s Hunt Lane Capital, Israel Englander’s Millennium Management and Ken Griffin’s Citadel Investment Group.

With a general bullishness amongst the heavyweights, key hedge funds have been driving this bullishness. Hunt Lane Capital, managed by Dennis Puri and Oliver Keller, established the biggest position in Nutanix, Inc. (NASDAQ:NTNX). Hunt Lane Capital had $72.6 million invested in the company at the end of the quarter. Dmitry Balyasny’s Balyasny Asset Management also made a $14 million investment in the stock during the quarter. The other funds with new positions in the stock are Steve Cohen’s Point72 Asset Management, Andrew Sandler’s Sandler Capital Management, and Robert B. Gillam’s McKinley Capital Management.

As you can see these stocks had an average of 30.75 hedge funds with bullish positions and the average amount invested in these stocks was $631 million. That figure was $653 million in NTNX’s case. Jefferies Financial Group Inc. (NYSE:JEF) is the most popular stock in this table. On the other hand Ares Capital Corporation (NASDAQ:ARCC) is the least popular one with only 25 bullish hedge fund positions. Nutanix, Inc. (NASDAQ:NTNX) is not the most popular stock in this group but hedge fund interest is still above average. This is a slightly positive signal but we’d rather spend our time researching stocks that hedge funds are piling on. In this regard JEF might be a better candidate to consider a long position.