Heading into the fourth quarter of 2018, a total of 22 of the hedge funds tracked by Insider Monkey were long this stock, a change of 10% from the previous quarter. On the other hand, there were a total of 14 hedge funds with a bullish position in MGRC at the beginning of this year. With hedgies’ positions undergoing their usual ebb and flow, there exists an “upper tier” of key hedge fund managers who were increasing their stakes substantially (or already accumulated large positions). 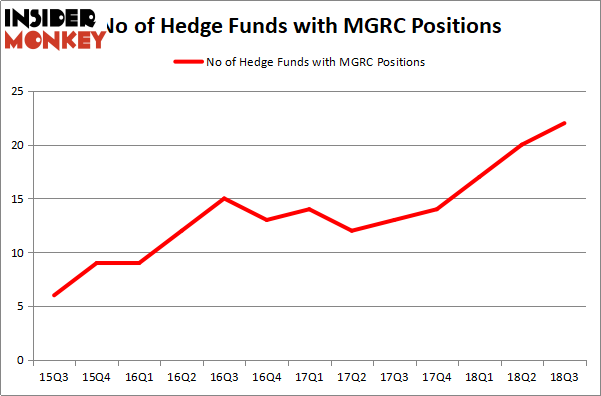 More specifically, Renaissance Technologies was the largest shareholder of McGrath RentCorp (NASDAQ:MGRC), with a stake worth $36.7 million reported as of the end of September. Trailing Renaissance Technologies was Arrowstreet Capital, which amassed a stake valued at $16 million. Headlands Capital, Royce & Associates, and AQR Capital Management were also very fond of the stock, giving the stock large weights in their portfolios.

As industrywide interest jumped, key hedge funds have been driving this bullishness. Marshall Wace LLP, managed by Paul Marshall and Ian Wace, created the biggest position in McGrath RentCorp (NASDAQ:MGRC). Marshall Wace LLP had $3.3 million invested in the company at the end of the quarter. David Costen Haley’s HBK Investments also initiated a $0.3 million position during the quarter. The other funds with new positions in the stock are Bruce Kovner’s Caxton Associates LP and Brandon Haley’s Holocene Advisors.

As you can see these stocks had an average of 17.25 hedge funds with bullish positions and the average amount invested in these stocks was $129 million. That figure was $140 million in MGRC’s case. Cardiovascular Systems Inc (NASDAQ:CSII) is the most popular stock in this table. On the other hand AZZ Incorporated (NYSE:AZZ) is the least popular one with only 14 bullish hedge fund positions. McGrath RentCorp (NASDAQ:MGRC) is not the most popular stock in this group but hedge fund interest is still above average. This is a slightly positive signal but we’d rather spend our time researching stocks that hedge funds are piling on. In this regard CSII might be a better candidate to consider a long position.