Investing in small cap stocks has historically been a way to outperform the market, as small cap companies typically grow faster on average than the blue chips. That outperformance comes with a price, however, as there are occasional periods of higher volatility. The one and a half month time period since the end of the third quarter is one of those periods, as the Russell 2000 ETF (IWM) has underperformed the larger S&P 500 ETF (SPY) by about 4 percentage points. Given that the funds we track tend to have a disproportionate amount of their portfolios in smaller cap stocks, they have seen some volatility in their portfolios too. Actually their moves are potentially one of the factors that contributed to this volatility. In this article, we use our extensive database of hedge fund holdings to find out what the smart money thinks of Lincoln National Corporation (NYSE:LNC).

Is Lincoln National Corporation (NYSE:LNC) going to take off soon? Investors who are in the know are getting more optimistic. The number of long hedge fund positions went up by 5 recently. Our calculations also showed that LNC isn’t among the 30 most popular stocks among hedge funds.

To the average investor there are a multitude of gauges market participants have at their disposal to grade stocks. A duo of the most useful gauges are hedge fund and insider trading signals. Our researchers have shown that, historically, those who follow the best picks of the top fund managers can beat the broader indices by a significant amount (see the details here).

What have hedge funds been doing with Lincoln National Corporation (NYSE:LNC)? 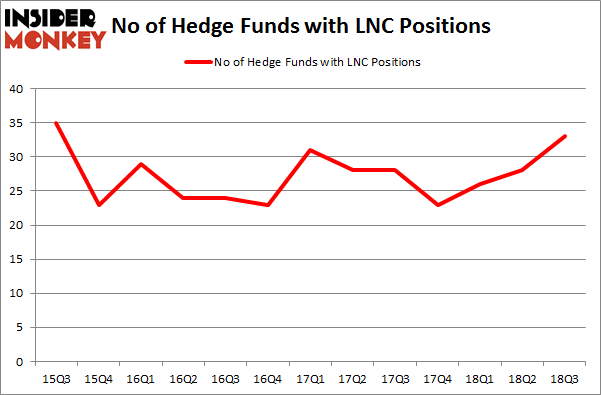 The largest stake in Lincoln National Corporation (NYSE:LNC) was held by Viking Global, which reported holding $224.2 million worth of stock at the end of September. It was followed by AQR Capital Management with a $168.4 million position. Other investors bullish on the company included East Side Capital (RR Partners), Arrowstreet Capital, and Carlson Capital.

Let’s now take a look at hedge fund activity in other stocks – not necessarily in the same industry as Lincoln National Corporation (NYSE:LNC) but similarly valued. We will take a look at Synopsys, Inc. (NASDAQ:SNPS), Genuine Parts Company (NYSE:GPC), Church & Dwight Co., Inc. (NYSE:CHD), and TAL Education Group (NYSE:TAL). All of these stocks’ market caps are closest to LNC’s market cap.

As you can see these stocks had an average of 24 hedge funds with bullish positions and the average amount invested in these stocks was $630 million. That figure was $1.00 billion in LNC’s case. Synopsys, Inc. (NASDAQ:SNPS) is the most popular stock in this table. On the other hand Church & Dwight Co., Inc. (NYSE:CHD) is the least popular one with only 20 bullish hedge fund positions. Compared to these stocks Lincoln National Corporation (NYSE:LNC) is more popular among hedge funds. Considering that hedge funds are fond of this stock in relation to its market cap peers, it may be a good idea to analyze it in detail and potentially include it in your portfolio.