Many investors, including Paul Tudor Jones or Stan Druckenmiller, have been saying for a while now that the current market is overvalued due to a low interest rate environment that leads to companies swapping their equity for debt and focusing mostly on short-term performance such as beating the quarterly earnings estimates. In the fourth quarter, many investors lost money due to unpredictable events such as the sudden increase in long-term interest rates and unintended consequences of the trade war with China. Nevertheless, many of the stocks that tanked in the third quarter still sport strong fundamentals and their decline was more related to the general market sentiment rather than their individual performance and hedge funds kept their bullish stance. In this article we will find out how hedge fund sentiment to Laredo Petroleum Inc (NYSE:LPI) changed recently.

Laredo Petroleum Inc (NYSE:LPI) was in 20 hedge funds’ portfolios at the end of September. LPI investors should pay attention to an increase in hedge fund sentiment in recent months. There were 16 hedge funds in our database with LPI positions at the end of the previous quarter. Our calculations also showed that LPI isn’t among the 30 most popular stocks among hedge funds.

What have hedge funds been doing with Laredo Petroleum Inc (NYSE:LPI)?

At Q3’s end, a total of 20 of the hedge funds tracked by Insider Monkey were long this stock, a change of 25% from the previous quarter. Below, you can check out the change in hedge fund sentiment towards LPI over the last 13 quarters. With hedgies’ capital changing hands, there exists a few noteworthy hedge fund managers who were boosting their stakes substantially (or already accumulated large positions). 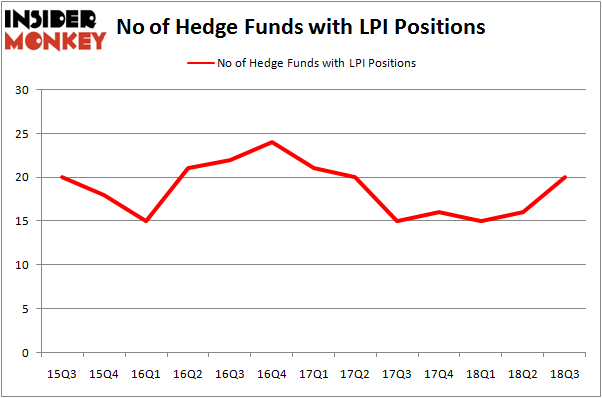 Among these funds, SailingStone Capital Partners held the most valuable stake in Laredo Petroleum Inc (NYSE:LPI), which was worth $321.3 million at the end of the third quarter. On the second spot was Millennium Management which amassed $75.4 million worth of shares. Moreover, AQR Capital Management, Water Street Capital, and Laurion Capital Management were also bullish on Laredo Petroleum Inc (NYSE:LPI), allocating a large percentage of their portfolios to this stock.

Consequently, specific money managers have been driving this bullishness. Laurion Capital Management, managed by Benjamin A. Smith, created the most outsized position in Laredo Petroleum Inc (NYSE:LPI). Laurion Capital Management had $29.3 million invested in the company at the end of the quarter. Daniel S. Och’s OZ Management also made a $1.4 million investment in the stock during the quarter. The other funds with new positions in the stock are Louis Bacon’s Moore Global Investments, David Costen Haley’s HBK Investments, and George Zweig, Shane Haas and Ravi Chander’s Signition LP.

As you can see these stocks had an average of 18.5 hedge funds with bullish positions and the average amount invested in these stocks was $192 million. That figure was $590 million in LPI’s case. Brinker International, Inc. (NYSE:EAT) is the most popular stock in this table. On the other hand Mack Cali Realty Corp (NYSE:CLI) is the least popular one with only 11 bullish hedge fund positions. Laredo Petroleum Inc (NYSE:LPI) is not the most popular stock in this group but hedge fund interest is still above average. This is a slightly positive signal but we’d rather spend our time researching stocks that hedge funds are piling on. In this regard EAT might be a better candidate to consider a long position.