We know that hedge funds generate strong, risk-adjusted returns over the long run, therefore imitating the picks that they are collectively bullish on can be a profitable strategy for retail investors. With billions of dollars in assets, smart money investors have to conduct complex analyses, spend many resources and use tools that are not always available for the general crowd. This doesn’t mean that they don’t have occasional colossal losses; they do (like Peltz’s recent General Electric losses). However, it is still good idea to keep an eye on hedge fund activity. With this in mind, as the current round of 13F filings has just ended, let’s examine the smart money sentiment towards Kennametal Inc. (NYSE:KMT).

Is Kennametal Inc. (NYSE:KMT) the right investment to pursue these days? Prominent investors are in an optimistic mood. The number of bullish hedge fund positions moved up by 3 recently. Our calculations also showed that KMT isn’t among the 30 most popular stocks among hedge funds.

What have hedge funds been doing with Kennametal Inc. (NYSE:KMT)?

At Q3’s end, a total of 21 of the hedge funds tracked by Insider Monkey were long this stock, a change of 17% from one quarter earlier. The graph below displays the number of hedge funds with bullish position in KMT over the last 13 quarters. With hedge funds’ positions undergoing their usual ebb and flow, there exists an “upper tier” of noteworthy hedge fund managers who were upping their stakes meaningfully (or already accumulated large positions). 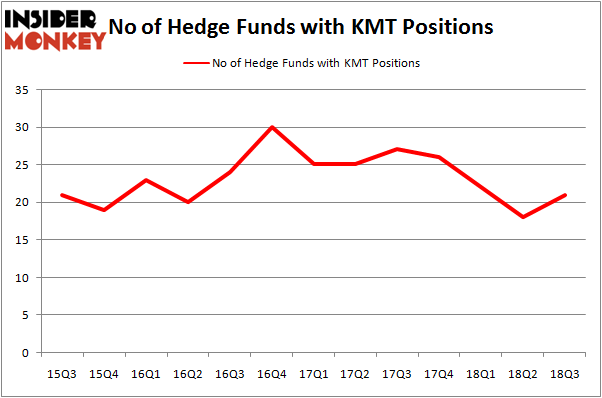 Among these funds, Ariel Investments held the most valuable stake in Kennametal Inc. (NYSE:KMT), which was worth $239.6 million at the end of the third quarter. On the second spot was Appaloosa Management LP which amassed $64.6 million worth of shares. Moreover, Renaissance Technologies, Millennium Management, and GAMCO Investors were also bullish on Kennametal Inc. (NYSE:KMT), allocating a large percentage of their portfolios to this stock.

With a general bullishness amongst the heavyweights, some big names have jumped into Kennametal Inc. (NYSE:KMT) headfirst. Precision Path Capital, managed by Ilya Boroditsky, assembled the most valuable position in Kennametal Inc. (NYSE:KMT). Precision Path Capital had $6.3 million invested in the company at the end of the quarter. Alexander Roepers’s Atlantic Investment Management also initiated a $4.4 million position during the quarter. The other funds with brand new KMT positions are Peter Algert and Kevin Coldiron’s Algert Coldiron Investors, Ernest Chow and Jonathan Howe’s Sensato Capital Management, and Matthew Tewksbury’s Stevens Capital Management.

Let’s now review hedge fund activity in other stocks – not necessarily in the same industry as Kennametal Inc. (NYSE:KMT) but similarly valued. We will take a look at Liberty Latin America Ltd. (NASDAQ:LILA), Navient Corp (NASDAQ:NAVI), The Brink’s Company (NYSE:BCO), and UMB Financial Corporation (NASDAQ:UMBF). All of these stocks’ market caps are similar to KMT’s market cap.

As you can see these stocks had an average of 18.25 hedge funds with bullish positions and the average amount invested in these stocks was $324 million. That figure was $439 million in KMT’s case. Navient Corp (NASDAQ:NAVI) is the most popular stock in this table. On the other hand Liberty Latin America Ltd. (NASDAQ:LILA) is the least popular one with only 11 bullish hedge fund positions. Kennametal Inc. (NYSE:KMT) is not the most popular stock in this group but hedge fund interest is still above average. This is a slightly positive signal but we’d rather spend our time researching stocks that hedge funds are piling on. In this regard NAVI might be a better candidate to consider a long position.