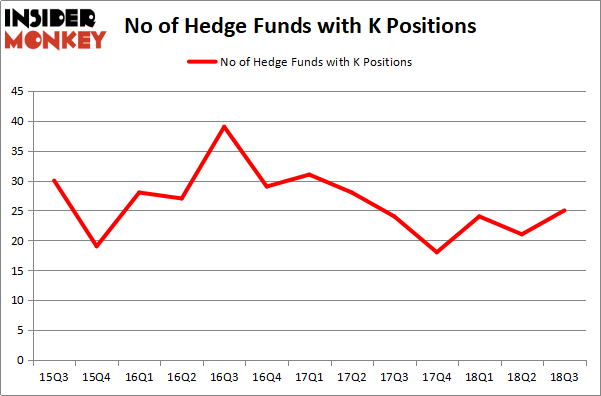 The largest stake in Kellogg Company (NYSE:K) was held by Pzena Investment Management, which reported holding $69.6 million worth of stock at the end of September. It was followed by Citadel Investment Group with a $68.4 million position. Other investors bullish on the company included GAMCO Investors, Two Sigma Advisors, and Adage Capital Management.

As one would reasonably expect, key money managers were breaking ground themselves. Renaissance Technologies, managed by Jim Simons, established the most outsized position in Kellogg Company (NYSE:K). Renaissance Technologies had $19.8 million invested in the company at the end of the quarter. Dmitry Balyasny’s Balyasny Asset Management also made a $18.6 million investment in the stock during the quarter. The following funds were also among the new K investors: George Soros’s Soros Fund Management, Greg Poole’s Echo Street Capital Management, and Ian Simm’s Impax Asset Management.

As you can see these stocks had an average of 25 hedge funds with bullish positions and the average amount invested in these stocks was $1.16 billion. That figure was $330 million in K’s case. Hilton Worldwide Holdings Inc (NYSE:HLT) is the most popular stock in this table. On the other hand Sun Life Financial Inc. (USA) (NYSE:SLF) is the least popular one with only 13 bullish hedge fund positions. Kellogg Company (NYSE:K) is not the least popular stock in this group but hedge fund interest is still below average. This is a slightly negative signal and we’d rather spend our time researching stocks that hedge funds are piling on. In this regard HLT might be a better candidate to consider a long position.

Is The PNC Financial Services Group, Inc. (PNC) A Good Stock To Buy?
Monthly Newsletter Strategy
Download a free copy of our newsletter and see the details inside!
Hedge Fund Resource Center
Related News
Why Food Stocks May Spoil in Your Portfolio in 2018 The 15 Most Popular Snack Brands in the World 11 Most Popular Snacks In The World 11 Most Ridiculous Lawsuits, Settlements, and Victories of All Time Cochineal Insects Products: 7 Foods Made With Crushed Bugs How Kellogg Company (K) Stacks Up Against Its Peers Billionaire Rob Citrone’s Monster Q3 Buys: Kellogg, Macy’s, Activision-Blizzard, More The 10 Best Islands to Visit in 2019 5 Most Socially Responsible Companies in America 5 Ways You Can Eliminate Credit Card Debt
Billionaire Hedge Funds