The Insider Monkey team has completed processing the quarterly 13F filings for the September quarter submitted by the hedge funds and other money managers included in our extensive database. Most hedge fund investors endured a torrid quarter, which certainly propelled them to adjust their equity holdings so as to maintain the desired risk profile. As a result, the relevancy of these public filings and their content is indisputable, as they may reveal numerous high-potential stocks. The following article will discuss the smart money sentiment towards Jabil Inc. (NYSE:JBL).

Jabil Inc. (NYSE:JBL) shareholders have witnessed an increase in hedge fund sentiment in recent months. JBL was in 22 hedge funds’ portfolios at the end of the third quarter of 2018. There were 21 hedge funds in our database with JBL holdings at the end of the previous quarter. Our calculations also showed that JBL isn’t among the 30 most popular stocks among hedge funds.

We’re going to take a glance at the key hedge fund action regarding Jabil Inc. (NYSE:JBL).

Heading into the fourth quarter of 2018, a total of 22 of the hedge funds tracked by Insider Monkey were long this stock, a change of 5% from one quarter earlier. By comparison, 21 hedge funds held shares or bullish call options in JBL heading into this year. With hedgies’ capital changing hands, there exists a few key hedge fund managers who were adding to their stakes meaningfully (or already accumulated large positions). 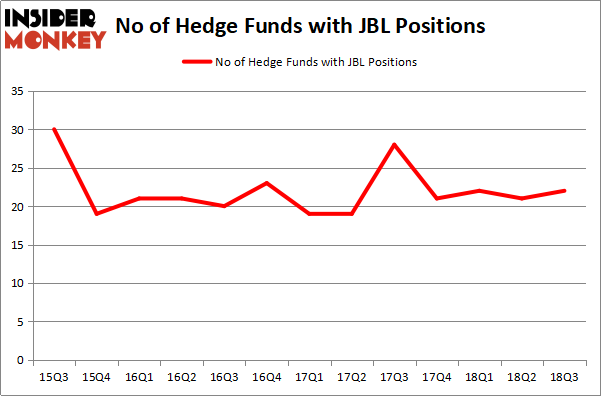 As one would reasonably expect, key hedge funds were breaking ground themselves. Simcoe Capital Management, managed by Jeffrey Jacobowitz, assembled the largest call position in Jabil Inc. (NYSE:JBL). Simcoe Capital Management had $16.2 million invested in the company at the end of the quarter. Brandon Haley’s Holocene Advisors also initiated a $1.1 million position during the quarter. The other funds with new positions in the stock are George Hall’s Clinton Group, Jeffrey Talpins’s Element Capital Management, and George Zweig, Shane Haas and Ravi Chander’s Signition LP.

As you can see these stocks had an average of 20.5 hedge funds with bullish positions and the average amount invested in these stocks was $194 million. That figure was $298 million in JBL’s case. OneMain Holdings Inc (NYSE:OMF) is the most popular stock in this table. On the other hand Trex Company, Inc. (NYSE:TREX) is the least popular one with only 17 bullish hedge fund positions. Jabil Inc. (NYSE:JBL) is not the most popular stock in this group but hedge fund interest is still above average. This is a slightly positive signal but we’d rather spend our time researching stocks that hedge funds are piling on. In this regard OMF might be a better candidate to consider a long position.

Cloudera, Inc. (CLDR): Are Hedge Funds Right About This Stock?
Monthly Newsletter Strategy
Download a free copy of our newsletter and see the details inside!
Hedge Fund Resource Center
Related News
Why Boeing, Jabil Circuit and Three Financial Stocks Are Making Headlines on Thursday These Stocks Were Getting Some Analyst Love On Tuesday Why Are Ctrip.com, Jabil Circuit, CLARCOR, and Two Other Stocks Trending Today? Why Ctrip, Jabil, and Three Other Stocks Are Trading Down Today Hedge Funds Are Dumping Jabil Circuit, Inc. (JBL) What Do Hedge Funds Think of These Two Rising Tech Stocks? Flextronics International Ltd. (FLEX), Jabil Circuit, Inc. (JBL): An Apple Inc. (AAPL) Flop Could Mean Double-Digit Gains For These 2 Stocks Five Reasons You Need a Day-Trading Mentor 15 Most Important Medical Discoveries of 2018 The 10 Best Islands to Visit in 2019
Billionaire Hedge Funds