While the market driven by short-term sentiment influenced by uncertainty regarding the future of the interest rate environment in the US, declining oil prices and the trade war with China, many smart money investors are keeping their optimism regarding the current bull run, while still hedging many of their long positions. However, as we know, big investors usually buy stocks with strong fundamentals, which is why we believe we can profit from imitating them. In this article, we are going to take a look at the smart money sentiment surrounding ICON Public Limited Company (NASDAQ:ICLR).

Is ICON Public Limited Company (NASDAQ:ICLR) undervalued? The best stock pickers are getting more bullish. The number of long hedge fund positions increased by 7 in recent months. Our calculations also showed that ICLR isn’t among the 30 most popular stocks among hedge funds.

In the eyes of most market participants, hedge funds are viewed as underperforming, outdated financial tools of the past. While there are more than 8,000 funds with their doors open at present, Our experts look at the top tier of this club, around 700 funds. These hedge fund managers command the majority of the hedge fund industry’s total asset base, and by watching their highest performing investments, Insider Monkey has brought to light a few investment strategies that have historically surpassed the broader indices. Insider Monkey’s flagship hedge fund strategy beat the S&P 500 index by 6 percentage points per annum since its inception in May 2014 through early November 2018. We were able to generate large returns even by identifying short candidates. Our portfolio of short stocks lost 24% since February 2017 (through December 3rd) even though the market was up nearly 23% during the same period. We just shared a list of 11 short targets in our latest quarterly update.

How have hedgies been trading ICON Public Limited Company (NASDAQ:ICLR)?

At the end of the third quarter, a total of 22 of the hedge funds tracked by Insider Monkey were bullish on this stock, a change of 47% from the previous quarter. On the other hand, there were a total of 24 hedge funds with a bullish position in ICLR at the beginning of this year. With the smart money’s positions undergoing their usual ebb and flow, there exists an “upper tier” of key hedge fund managers who were adding to their stakes considerably (or already accumulated large positions). 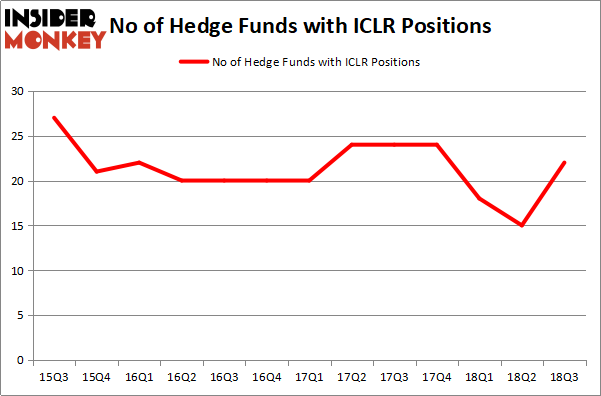 The largest stake in ICON Public Limited Company (NASDAQ:ICLR) was held by Renaissance Technologies, which reported holding $289.9 million worth of stock at the end of September. It was followed by Millennium Management with a $113.3 million position. Other investors bullish on the company included Partner Fund Management, McKinley Capital Management, and Polar Capital.

Now, key money managers were leading the bulls’ herd. Marshall Wace LLP, managed by Paul Marshall and Ian Wace, established the largest position in ICON Public Limited Company (NASDAQ:ICLR). Marshall Wace LLP had $3.7 million invested in the company at the end of the quarter. Vishal Saluja and Pham Quang’s Endurant Capital Management also made a $2.5 million investment in the stock during the quarter. The other funds with new positions in the stock are Andrew Feldstein and Stephen Siderow’s Blue Mountain Capital, D. E. Shaw’s D E Shaw, and David Costen Haley’s HBK Investments.

As you can see these stocks had an average of 27.25 hedge funds with bullish positions and the average amount invested in these stocks was $588 million. That figure was $577 million in ICLR’s case. DocuSign, Inc. (NASDAQ:DOCU) is the most popular stock in this table. On the other hand Brown & Brown, Inc. (NYSE:BRO) is the least popular one with only 22 bullish hedge fund positions. Compared to these stocks ICON Public Limited Company (NASDAQ:ICLR) is even less popular than BRO. Considering that hedge funds aren’t fond of this stock in relation to other companies analyzed in this article, it may be a good idea to analyze it in detail and understand why the smart money isn’t behind this stock. This isn’t necessarily bad news. Although it is possible that hedge funds may think the stock is overpriced and view the stock as a short candidate, they may not be very familiar with the bullish thesis. In either case more research is warranted.