Is Entergy Corporation (NYSE:ETR) a good investment right now? We check hedge fund and billionaire investor sentiment before delving into hours of research. Hedge funds spend millions of dollars on Ivy League graduates, expert networks, and get tips from industry insiders. They sometimes fail miserably but historically their consensus stock picks outperformed the market after adjusting for known risk factors.

Entergy Corporation (NYSE:ETR) investors should pay attention to an increase in support from the world’s most elite money managers of late. Our calculations also showed that ETR isn’t among the 30 most popular stocks among hedge funds.

We’re going to take a glance at the latest hedge fund action regarding Entergy Corporation (NYSE:ETR).

At Q3’s end, a total of 27 of the hedge funds tracked by Insider Monkey were bullish on this stock, a change of 29% from the second quarter of 2018. On the other hand, there were a total of 24 hedge funds with a bullish position in ETR at the beginning of this year. With hedgies’ sentiment swirling, there exists an “upper tier” of notable hedge fund managers who were boosting their holdings considerably (or already accumulated large positions). 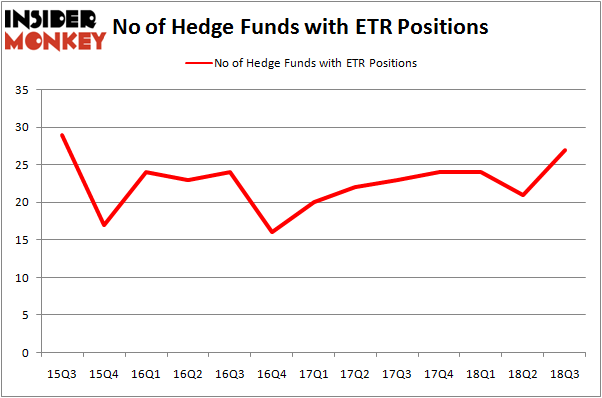 View table here if you experience formatting issues.
As you can see these stocks had an average of 26 hedge funds with bullish positions and the average amount invested in these stocks was $670 million. That figure was $1.33 billion in ETR’s case. Lincoln National Corporation (NYSE:LNC) is the most popular stock in this table. On the other hand Church & Dwight Co., Inc. (NYSE:CHD) is the least popular one with only 20 bullish hedge fund positions. Entergy Corporation (NYSE:ETR) is not the most popular stock in this group but hedge fund interest is still above average. This is a slightly positive signal but we’d rather spend our time researching stocks that hedge funds are piling on. In this regard LNC might be a better candidate to consider a long position.

Here is What Hedge Funds Think About Movado Group, Inc (MOV)
Monthly Newsletter Strategy
Download a free copy of our newsletter and see the details inside!
Hedge Fund Resource Center
Related News
50 Best Utility Dividend Stocks To Invest In 3 Utility Stocks That Will Pay You To Invest In Them Should You Buy Entergy Corporation (ETR)? The Smart Money Is Bullish On These 5 Dividend Stocks Hedge Funds Are Buying These 10 Mid-Caps, Part 2 Do Hedge Funds Love Entergy Corporation (ETR)? Billionaire Jim Simons’ Top High-Dividend Stock Picks The 10 Best Islands to Visit in 2019 5 Most Socially Responsible Companies in America 5 Ways You Can Eliminate Credit Card Debt
Billionaire Hedge Funds