Activision Blizzard, Inc. (NASDAQ:ATVI) is the second-most popular gaming stock among hedge funds as of September 30, with 74 long the stock, a surge of over 25% in 2018. It’s also one of the 30 Most Popular Stocks Among Hedge Funds, ranking 24th on that list. Among the funds that love Activision Blizzard is Amit Nitin Doshi‘s Harbor Spring Capital, which opened a long position in ATVI during Q1. In its Q2 investor letter, the fund expressed bullishness on the game developer, citing its numerous highly valuable franchises, the growing chunk of its revenue that comes from higher-margin digital transactions, and its potential to expand to mobile in a big way. In that vein, the company recently shocked (horrified might be the appropriate word in the case of hardcore fans) BlizzCon attendees with the reveal of a Diablo game for mobile devices.

If you’d ask most shareholders, hedge funds are assumed to be underperforming, outdated financial vehicles of years past. While there are more than 8,000 funds trading at present, we look at the crème de la crème of this group, approximately 700 funds. These money managers manage the majority of the smart money’s total asset base, and by keeping an eye on their unrivaled equity investments, Insider Monkey has unearthed numerous investment strategies that have historically defeated Mr. Market. Insider Monkey’s flagship hedge fund strategy defeated the S&P 500 index by 6 percentage points per year since its inception in May 2014 through early November 2018. We were able to generate large returns even by identifying short candidates. Our portfolio of short stocks lost 26.1% since February 2017 even though the market was up nearly 19% during the same period. We just shared a list of 11 short targets in our latest quarterly update.

Heading into the fourth quarter of 2018, a total of 74 of the hedge funds tracked by Insider Monkey were bullish on this stock, a 12% increase from the previous quarter. Below, you can check out the change in hedge fund sentiment towards ATVI over the last 13 quarters. With hedge funds’ sentiment swirling, there exists a select group of key hedge fund managers who were increasing their stakes meaningfully (or already accumulated large positions). 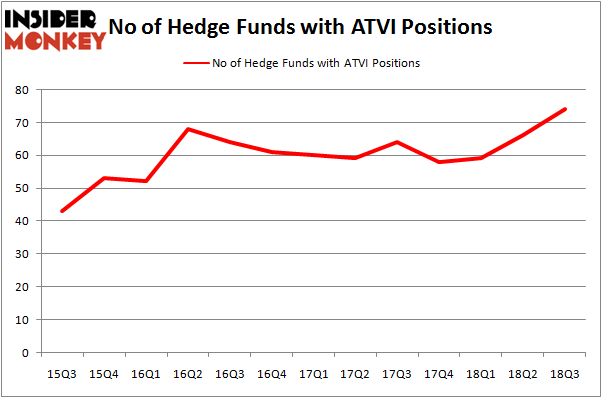 Of the funds tracked by Insider Monkey, Lone Pine Capital, managed by Stephen Mandel, holds the most valuable position in Activision Blizzard, Inc. (NASDAQ:ATVI). Lone Pine Capital has a $1.34 billion position in the stock, comprising 6.9% of its 13F portfolio. Sitting at the No. 2 spot is Coatue Management, led by Philippe Laffont, holding a $729.2 million position; 7.6% of its 13F portfolio is allocated to the company. Other peers with similar optimism encompass John Armitage’s Egerton Capital Limited, Ken Griffin’s Citadel Investment Group and David Goel and Paul Ferri’s Matrix Capital Management.

As aggregate interest increased, specific money managers have been driving this bullishness. Holocene Advisors, managed by Brandon Haley, created the most valuable position in Activision Blizzard, Inc. (NASDAQ:ATVI). Holocene Advisors had $52.6 million invested in the company at the end of the quarter. Adam Wolfberg and Steven Landry’s EastBay Asset Management also made a $45.8 million investment in the stock during the quarter. The other funds with brand new ATVI positions are Robert Pitts’ Steadfast Capital Management, James Parsons’ Junto Capital Management, and Roberto Mignone’s Bridger Management.

As you can see these stocks had an average of 44 hedge funds with bullish positions and the average amount invested in these stocks was $2.60 billion. That figure was $5.78 billion in ATVI’s case. Celgene Corporation (NASDAQ:CELG) is the most popular stock in this table. On the other hand Occidental Petroleum Corporation (NYSE:OXY) is the least popular one with only 35 bullish hedge fund positions. Compared to these stocks Activision Blizzard, Inc. (NASDAQ:ATVI) is more popular among hedge funds. Considering that hedge funds love this stock, it may be a good idea to analyze it in detail and potentially include it in your portfolio.