Cyberark Software Ltd (NASDAQ:CYBR) was in 24 hedge funds’ portfolios at the end of September. CYBR has seen an increase in support from the world’s most elite money managers in recent months. There were 17 hedge funds in our database with CYBR holdings at the end of the previous quarter. Our calculations also showed that CYBR isn’t among the 30 most popular stocks among hedge funds.

Today there are a multitude of gauges shareholders use to assess publicly traded companies. A duo of the less utilized gauges are hedge fund and insider trading interest. Our researchers have shown that, historically, those who follow the best picks of the elite hedge fund managers can outperform their index-focused peers by a solid amount (see the details here).

What have hedge funds been doing with Cyberark Software Ltd (NASDAQ:CYBR)? 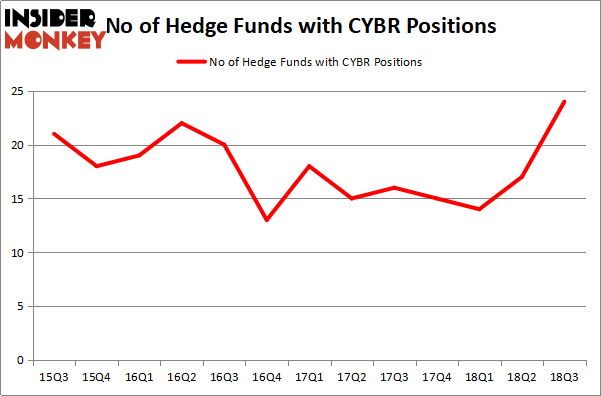 The largest stake in Cyberark Software Ltd (NASDAQ:CYBR) was held by RGM Capital, which reported holding $75 million worth of stock at the end of September. It was followed by Eminence Capital with a $67.6 million position. Other investors bullish on the company included Citadel Investment Group, Arrowstreet Capital, and Alyeska Investment Group.

With a general bullishness amongst the heavyweights, some big names were breaking ground themselves. Driehaus Capital, managed by Richard Driehaus, established the most valuable position in Cyberark Software Ltd (NASDAQ:CYBR). Driehaus Capital had $9.3 million invested in the company at the end of the quarter. Frank Slattery’s Symmetry Peak Management also initiated a $1.9 million position during the quarter. The following funds were also among the new CYBR investors: Paul Marshall and Ian Wace’s Marshall Wace LLP, Paul Tudor Jones’s Tudor Investment Corp, and Jeffrey Talpins’s Element Capital Management.

As you can see these stocks had an average of 11.75 hedge funds with bullish positions and the average amount invested in these stocks was $209 million. That figure was $408 million in CYBR’s case. Ironwood Pharmaceuticals, Inc. (NASDAQ:IRWD) is the most popular stock in this table. On the other hand Stantec Inc. (NYSE:STN) is the least popular one with only 5 bullish hedge fund positions. Compared to these stocks Cyberark Software Ltd (NASDAQ:CYBR) is more popular among hedge funds. Considering that hedge funds are fond of this stock in relation to its market cap peers, it may be a good idea to analyze it in detail and potentially include it in your portfolio.

Should You Buy Kohl’s Corporation (KSS)?
Monthly Newsletter Strategy
Download a free copy of our newsletter and see the details inside!
Hedge Fund Resource Center
Related News
13G Filing: Eminence Capital and Cyberark Software Ltd (CYBR) 40 Fresh Stories to Know How is it Going in the Financial Markets Today Is Cyberark Software Ltd (CYBR) a Good Stock To Buy? Are AT&T Inc. (T), Amazon.com, Inc. (AMZN) & Two Other Stocks Worth Adding to Your Portfolio? Reynolds American, Inc. (RAI), MGP Ingredients Inc (MGPI), and More: Here’s What Analysts Had To Say About These Stocks in the Spotlight A Look at Five Stocks Trending on Wednesday Following Latest Financial Results Here’s Why These 4 Stocks Are in the Spotlight This Morning The 10 Best Islands to Visit in 2019 5 Most Socially Responsible Companies in America 5 Ways You Can Eliminate Credit Card Debt
Billionaire Hedge Funds