Concerns over rising interest rates and expected further rate increases have hit several stocks hard since the end of the third quarter. NASDAQ and Russell 2000 indices are already in correction territory. More importantly, Russell 2000 ETF (IWM) underperformed the larger S&P 500 ETF (SPY) by about 4 percentage points in the first half of the fourth quarter. Hedge funds and institutional investors tracked by Insider Monkey usually invest a disproportionate amount of their portfolios in smaller cap stocks. We have been receiving indications that hedge funds were paring back their overall exposure and this is one of the factors behind the recent movements in major indices. In this article, we will take a closer look at hedge fund sentiment towards Cirrus Logic, Inc. (NASDAQ:CRUS).

Cirrus Logic, Inc. (NASDAQ:CRUS) was in 21 hedge funds’ portfolios at the end of September. CRUS investors should pay attention to an increase in hedge fund sentiment recently. There were 20 hedge funds in our database with CRUS positions at the end of the previous quarter. Our calculations also showed that crus isn’t among the 30 most popular stocks among hedge funds.

If you’d ask most traders, hedge funds are viewed as slow, outdated financial vehicles of the past. While there are greater than 8,000 funds trading at present, We choose to focus on the elite of this group, about 700 funds. Most estimates calculate that this group of people direct bulk of the smart money’s total capital, and by keeping an eye on their first-class investments, Insider Monkey has formulated many investment strategies that have historically outstripped Mr. Market. Insider Monkey’s flagship hedge fund strategy outstripped the S&P 500 index by 6 percentage points per annum since its inception in May 2014 through early November 2018. We were able to generate large returns even by identifying short candidates. Our portfolio of short stocks lost 24% since February 2017 (through December 3rd) even though the market was up nearly 23% during the same period. We just shared a list of 11 short targets in our latest quarterly update.

How have hedgies been trading Cirrus Logic, Inc. (NASDAQ:CRUS)? 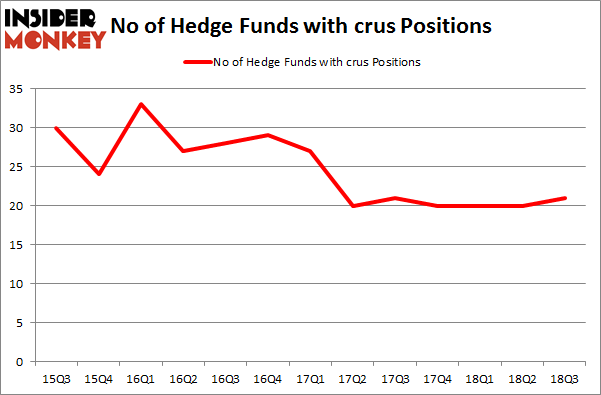 More specifically, AQR Capital Management was the largest shareholder of Cirrus Logic, Inc. (NASDAQ:CRUS), with a stake worth $105.7 million reported as of the end of September. Trailing AQR Capital Management was Partner Fund Management, which amassed a stake valued at $43.4 million. GLG Partners, Royce & Associates, and D E Shaw were also very fond of the stock, giving the stock large weights in their portfolios.

Now, key money managers have been driving this bullishness. PDT Partners, managed by Peter Muller, assembled the biggest position in Cirrus Logic, Inc. (NASDAQ:CRUS). PDT Partners had $4.4 million invested in the company at the end of the quarter. Steve Cohen’s Point72 Asset Management also made a $0.7 million investment in the stock during the quarter. The other funds with brand new CRUS positions are Michael Platt and William Reeves’s BlueCrest Capital Mgmt. and Gavin Saitowitz and Cisco J. del Valle’s Springbok Capital.

As you can see these stocks had an average of 15.75 hedge funds with bullish positions and the average amount invested in these stocks was $267 million. That figure was $259 million in CRUS’s case. PTC Therapeutics, Inc. (NASDAQ:PTCT) is the most popular stock in this table. On the other hand Intrexon Corp (NYSE:XON) is the least popular one with only 9 bullish hedge fund positions. Cirrus Logic, Inc. (NASDAQ:CRUS) is not the most popular stock in this group but hedge fund interest is still above average. This is a slightly positive signal but we’d rather spend our time researching stocks that hedge funds are piling on. In this regard PTCT might be a better candidate to consider a long position.