The government requires hedge funds and wealthy investors with over a certain portfolio size to file a report that shows their positions at the end of every quarter. Even though it isn’t the intention, these filings level the playing field for ordinary investors. The latest round of 13F filings disclosed the funds’ positions on September 30. We at Insider Monkey have made an extensive database of more than 700 of those elite funds and prominent investors’ filings. In this article, we analyze how these elite funds and prominent investors traded Chase Corporation (NYSEAMEX:CCF) based on those filings.

Is Chase Corporation (NYSEAMEX:CCF) a marvelous stock to buy now? Investors who are in the know are taking an optimistic view. The number of long hedge fund bets went up by 1 lately. Our calculations also showed that CCF isn’t among the 30 most popular stocks among hedge funds.

What does the smart money think about Chase Corporation (NYSEAMEX:CCF)? 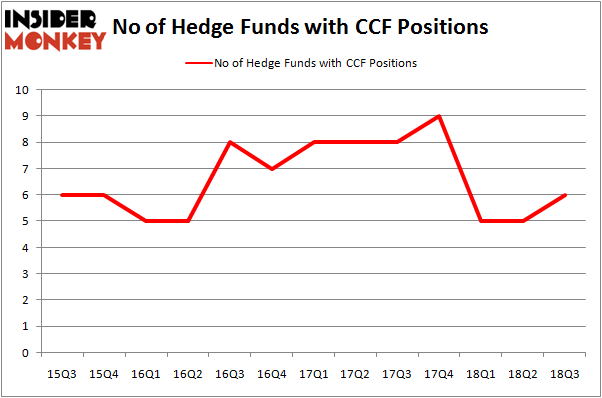 Of the funds tracked by Insider Monkey, Royce & Associates, managed by Chuck Royce, holds the biggest position in Chase Corporation (NYSEAMEX:CCF). Royce & Associates has a $45.4 million position in the stock, comprising 0.3% of its 13F portfolio. On Royce & Associates’s heels is Jim Simons of Renaissance Technologies, with a $42.5 million position; the fund has less than 0.1%% of its 13F portfolio invested in the stock. Other peers that hold long positions consist of Cliff Asness’s AQR Capital Management, Israel Englander’s Millennium Management and Roger Ibbotson’s Zebra Capital Management.

As industrywide interest jumped, key hedge funds were breaking ground themselves. Millennium Management, managed by Israel Englander, created the largest position in Chase Corporation (NYSEAMEX:CCF). Millennium Management had $0.6 million invested in the company at the end of the quarter. Peter Muller’s PDT Partners also initiated a $0.2 million position during the quarter.

As you can see these stocks had an average of 10.75 hedge funds with bullish positions and the average amount invested in these stocks was $93 million. That figure was $91 million in CCF’s case. Entercom Communications Corp. (NYSE:ETM) is the most popular stock in this table. On the other hand Forum Energy Technologies Inc (NYSE:FET) is the least popular one with only 9 bullish hedge fund positions. Compared to these stocks Chase Corporation (NYSEAMEX:CCF) is even less popular than FET. Considering that hedge funds aren’t fond of this stock in relation to other companies analyzed in this article, it may be a good idea to analyze it in detail and understand why the smart money isn’t behind this stock. This isn’t necessarily bad news. Although it is possible that hedge funds may think the stock is overpriced and view the stock as a short candidate, they may not be very familiar with the bullish thesis. In either case more research is warranted.