Is BlueLinx Holdings Inc. (NYSE:BXC) a bargain? Money managers are buying. The number of long hedge fund positions improved by 1 recently, and the company was in 12 hedge funds’ portfolios at the end of September. With only 12 hedge funds long the stock, the company didn’t stand a chance to make it as one of the 30 most popular stocks among hedge funds in Q3 of 2018. Just because the stock wasn’t part of the favorite group of stock in the third quarter, that doesn’t mean you shouldn’t consider it for your portfolio. After all, the stock has seen an increase in enthusiasm from smart money investors in recent months. That’s why in this article, we are going to take a closer look at BlueLinx Holdings Inc. (NYSE:BXC).

In its recent Quarterly Report Alluvial Capital Management also shares its opinion on the company. We bring you one small part of that discussion:

“After hitting a high of $42 in early September, BlueLinx has posted a deep and steady decline to below the $22 mark, a decline of 51%. This collapse occurred on no meaningful company-specific news, only mounting fears of a coming slowdownin the housing and construction markets. As a result of its watershed acquisition of Cedar Creek, BlueLinx carries a large amount of debt. The company is working to reduce this debt in both  relative and absolute terms, but for now, small changes in the perceived value of the enterprise will have an outsized effect on the value of BlueLinx’s equity.”

In the eyes of most traders, hedge funds are assumed to be unimportant, outdated financial tools of years past. While there are more than 8000 funds with their doors open at present, Our researchers look at the masters of this group, approximately 700 funds. These money managers control the majority of the hedge fund industry’s total asset base, and by keeping an eye on their inimitable investments, Insider Monkey has unearthed various investment strategies that have historically beaten the S&P 500 index. Insider Monkey’s flagship hedge fund strategy outrun the S&P 500 index by 6 percentage points annually since its inception in May 2014 through early November 2018. We were able to generate large returns even by identifying short candidates. Our portfolio of short stocks lost 26.1% since February 2017 even though the market was up nearly 19% during the same period. We just shared a list of 11 short targets in our latest quarterly update.

What have hedge funds been doing with BlueLinx Holdings Inc. (NYSE:BXC)? 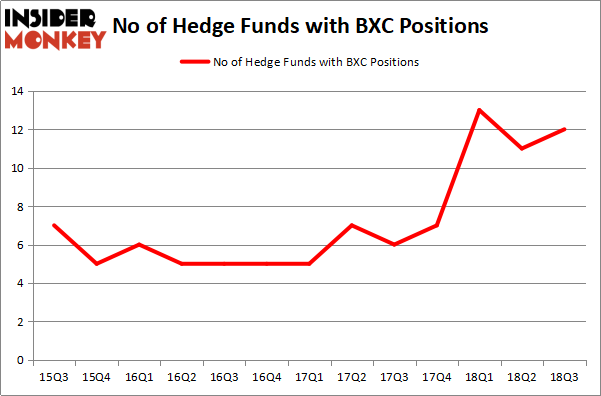 Among these funds, Renaissance Technologies held the most valuable stake in BlueLinx Holdings Inc. (NYSE:BXC), which was worth $11.7 million at the end of the third quarter. On the second spot was Tontine Asset Management which amassed $8.5 million worth of shares. Moreover, Adage Capital Management, Venator Capital Management, and Snow Park Capital Partners were also bullish on BlueLinx Holdings Inc. (NYSE:BXC), allocating a large percentage of their portfolios to this stock.

Now, key money managers were breaking ground themselves. Ancora Advisors, managed by Frederick DiSanto, established the largest position in BlueLinx Holdings Inc. (NYSE:BXC). Ancora Advisors had $3.1 million invested in the company at the end of the quarter. Brian Gaines’s Springhouse Capital Management also initiated a $1.9 million position during the quarter. The only other fund with a brand new BXC position is Austin Wiggins Hopper’s AWH Capital.

As you can see these stocks had an average of 7 hedge funds with bullish positions and the average amount invested in these stocks was $24 million. That figure was $50 million in BXC’s case. Industrea Acquisition Corp. (NASDAQ:INDU) is the most popular stock in this table. On the other hand Navios Maritime Partners L.P. (NYSE:NMM) is the least popular one with only 5 bullish hedge fund positions. Compared to these stocks BlueLinx Holdings Inc. (NYSE:BXC) is more popular among hedge funds. Considering that hedge funds are fond of this stock in relation to its market cap peers, it may be a good idea to analyze it in detail and potentially include it in your portfolio.