A whopping number of 13F filings filed with U.S. Securities and Exchange Commission has been processed by Insider Monkey so that individual investors can look at the overall hedge fund sentiment towards the stocks included in their watchlists. These freshly-submitted public filings disclose money managers’ equity positions as of the end of the three-month period that ended September 30, so let’s proceed with the discussion of the hedge fund sentiment on Assured Guaranty Ltd. (NYSE:AGO).

Assured Guaranty Ltd. (NYSE:AGO) investors should pay attention to an increase in hedge fund sentiment in recent months. AGO was in 33 hedge funds’ portfolios at the end of the third quarter of 2018. There were 32 hedge funds in our database with AGO positions at the end of the previous quarter. However, the company’s shares didn’t make it as one of the 30 stocks billionaires are crazy about: Insider Monkey billionaires stock index.

In the financial world there are tons of metrics stock market investors employ to value publicly traded companies. Two of the less utilized metrics are hedge fund and insider trading indicators. We have shown that, historically, those who follow the best picks of the top fund managers can outpace their index-focused peers by a healthy amount (see the details here).

What have hedge funds been doing with Assured Guaranty Ltd. (NYSE:AGO)?

At the end of the third quarter, a total of 33 of the hedge funds tracked by Insider Monkey were bullish on this stock, a change of 3% from the second quarter of 2018. The graph below displays the number of hedge funds with bullish position in AGO over the last 13 quarters. With hedge funds’ positions undergoing their usual ebb and flow, there exists an “upper tier” of noteworthy hedge fund managers who were boosting their stakes significantly (or already accumulated large positions). 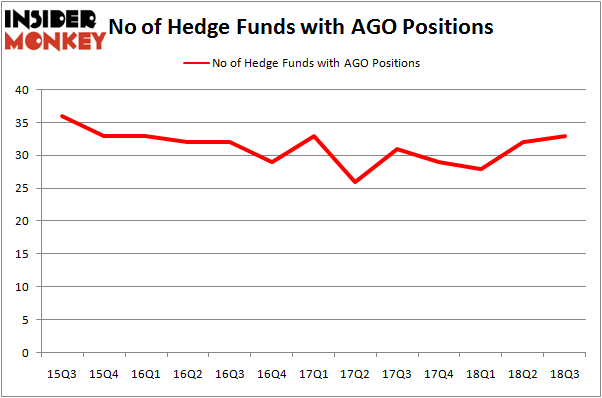 The largest stake in Assured Guaranty Ltd. (NYSE:AGO) was held by AQR Capital Management, which reported holding $147 million worth of stock at the end of September. It was followed by GLG Partners with a $89.6 million position. Other investors bullish on the company included Kahn Brothers, Taconic Capital, and GoldenTree Asset Management.

The Bermuda-based company recently unveiled its quarterly earnings, beating analyst estimates with third-quarter earnings per share of $1.47. The financial services provider logged operating income of $161 million, or $1.47 per share, in comparison to $156 million, or $1.29 per share in 2017.

The company drew the ire of billionaire investor David Einhorn of Greenlight Capital at the Sohn conference in New York City, where he urged investors to short the stock. Einhorn believes Assured Guaranty is heading for implosion (for more exclusive Sohn coverage, click here) predicting the end could come as early as this year.

A short extract from our exclusive Sohn coverage:

Einhorn estimates that Assured’s exposure to bad debt in Puerto Rico has led to $2.8 billion in implied losses that the company hasn’t recognized so as not to put its S&P rating at risk, and that it’s weighed down by junk grade bonds, with its $7 billion in capital being 32- to 54-times levered.

Assured Guaranty Ltd. (NYSE:AGO) responded to Einhorn’s presentation by stating that he “demonstrates a fundamental lack of understanding of our business model and the municipal debt markets,” and claimed that its balance sheet is strong and it doesn’t face liquidity risks.

As one would reasonably expect, key hedge funds were breaking ground themselves. Rubric Capital Management, managed by David Rosen, initiated the most outsized position in Assured Guaranty Ltd. (NYSE:AGO). Rubric Capital Management had $7.8 million invested in the company at the end of the quarter. Steve Cohen’s Point72 Asset Management also made a $1.4 million investment in the stock during the quarter. The following funds were also among the new AGO investors: John Overdeck and David Siegel’s Two Sigma Advisors, Peter Rathjens, Bruce Clarke and John Campbell’s Arrowstreet Capital, and Roger Ibbotson’s Zebra Capital Management.

As you can see these stocks had an average of 21.25 hedge funds with bullish positions and the average amount invested in these stocks was $369 million. That figure was $615 million in AGO’s case. Carter’s, Inc. (NYSE:CRI) is the most popular stock in this table. On the other hand Nu Skin Enterprises, Inc. (NYSE:NUS) is the least popular one with only 18 bullish hedge fund positions. Compared to these stocks Assured Guaranty Ltd. (NYSE:AGO) is more popular among hedge funds. Considering that hedge funds are fond of this stock in relation to its market cap peers, it may be a good idea to analyze it in detail and potentially include it in your portfolio.