Most investors tend to think that hedge funds and other asset managers are worthless, as they cannot beat even simple index fund portfolios. In fact, most people expect hedge funds to compete with and outperform the bull market that we have witnessed over the past few years. However, hedge funds are generally partially hedged and aim at delivering attractive risk-adjusted returns rather than following the ups and downs of equity markets hoping that they will outperform the broader market. Our research shows that hedge funds do have great stock picking skills, so let’s take a glance at the smart money sentiment towards Akebia Therapeutics Inc (NASDAQ:AKBA).

Is Akebia Therapeutics Inc (NASDAQ:AKBA) worth your attention right now? Prominent investors are in an optimistic mood. The number of long hedge fund bets moved up by 2 lately. Our calculations also showed that AKBA isn’t among the 30 most popular stocks among hedge funds.

At Q3’s end, a total of 19 of the hedge funds tracked by Insider Monkey were bullish on this stock, a change of 12% from the previous quarter. The graph below displays the number of hedge funds with bullish position in AKBA over the last 13 quarters. With hedgies’ capital changing hands, there exists a select group of notable hedge fund managers who were upping their holdings considerably (or already accumulated large positions). 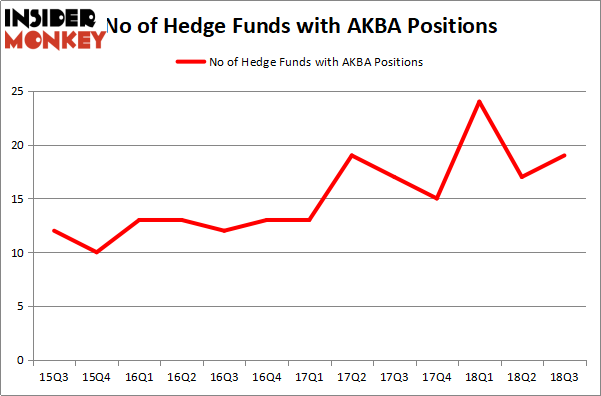 Of the funds tracked by Insider Monkey, Wilmot B. Harkey and Daniel Mack’s Nantahala Capital Management has the largest position in Akebia Therapeutics Inc (NASDAQ:AKBA), worth close to $41.7 million, amounting to 1.1% of its total 13F portfolio. Coming in second is Joseph Edelman of Perceptive Advisors, with a $21.6 million position; the fund has 0.6% of its 13F portfolio invested in the stock. Remaining professional money managers with similar optimism include Jim Simons’s Renaissance Technologies, David Abrams’s Abrams Capital Management and Ken Griffin’s Citadel Investment Group.

As you can see these stocks had an average of 14 hedge funds with bullish positions and the average amount invested in these stocks was $106 million. That figure was $122 million in AKBA’s case. Pure Acquisition Corp. (NASDAQ:PACQ) is the most popular stock in this table. On the other hand Waterstone Financial, Inc. (NASDAQ:WSBF) is the least popular one with only 9 bullish hedge fund positions. Akebia Therapeutics Inc (NASDAQ:AKBA) is not the most popular stock in this group but hedge fund interest is still above average. This is a slightly positive signal but we’d rather spend our time researching stocks that hedge funds are piling on. In this regard PACQ might be a better candidate to consider a long position.