Hedge Funds Are Coming Back To OneMain Holdings Inc (OMF)

The latest 13F reporting period has come and gone, and Insider Monkey have plowed through 823 13F filings that hedge funds and well-known value investors are required to file by the SEC. The 13F filings show the funds’ and investors’ portfolio positions as of June 30th, when the S&P 500 Index was trading around the 3100 level. Since the end of March, investors decided to bet on the economic recovery and a stock market rebound. S&P 500 Index returned more than 50% since its bottom. In this article you are going to find out whether hedge funds thought OneMain Holdings Inc (NYSE:OMF) was a good investment heading into the third quarter and how the stock traded in comparison to the top hedge fund picks.

Is OneMain Holdings Inc (NYSE:OMF) the right pick for your portfolio? The best stock pickers were taking a bullish view. The number of bullish hedge fund bets rose by 3 recently. OneMain Holdings Inc (NYSE:OMF) was in 37 hedge funds’ portfolios at the end of the second quarter of 2020. The all time high for this statistics is 39. Our calculations also showed that OMF isn’t among the 30 most popular stocks among hedge funds (click for Q2 rankings and see the video for a quick look at the top 5 stocks).

At Insider Monkey we scour multiple sources to uncover the next great investment idea. For example, Federal Reserve has been creating trillions of dollars electronically to keep the interest rates near zero. We believe this will lead to inflation and boost precious metals prices. So, we are checking out this junior gold mining stock. Legal marijuana is one of the fastest growing industries right now, so we are checking out stock pitches like “the Starbucks of cannabis” to identify the next tenbagger. We read hedge fund investor letters and listen to stock pitches at hedge fund conferences. We go through lists like the 10 most profitable companies in the world to pick the best large-cap stocks to buy. Even though we recommend positions in only a tiny fraction of the companies we analyze, we check out as many stocks as we can. Now we’re going to take a peek at the new hedge fund action surrounding OneMain Holdings Inc (NYSE:OMF).

Heading into the third quarter of 2020, a total of 37 of the hedge funds tracked by Insider Monkey were bullish on this stock, a change of 9% from one quarter earlier. The graph below displays the number of hedge funds with bullish position in OMF over the last 20 quarters. With hedge funds’ sentiment swirling, there exists a select group of noteworthy hedge fund managers who were adding to their stakes considerably (or already accumulated large positions). 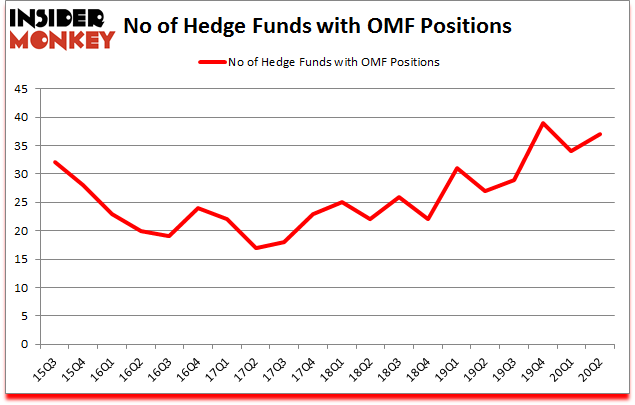 According to publicly available hedge fund and institutional investor holdings data compiled by Insider Monkey, Basswood Capital, managed by Matthew Lindenbaum, holds the number one position in OneMain Holdings Inc (NYSE:OMF). Basswood Capital has a $57.7 million position in the stock, comprising 5.5% of its 13F portfolio. Sitting at the No. 2 spot is Miller Value Partners, managed by Bill Miller, which holds a $55.3 million position; the fund has 2.5% of its 13F portfolio invested in the stock. Remaining peers that hold long positions consist of Phill Gross and Robert Atchinson’s Adage Capital Management, Alex Lieblong’s Key Colony Management and Peter Rathjens, Bruce Clarke and John Campbell’s Arrowstreet Capital. In terms of the portfolio weights assigned to each position Key Colony Management allocated the biggest weight to OneMain Holdings Inc (NYSE:OMF), around 92.24% of its 13F portfolio. Basswood Capital is also relatively very bullish on the stock, setting aside 5.54 percent of its 13F equity portfolio to OMF.

Consequently, some big names were leading the bulls’ herd. Brigade Capital, managed by Don Morgan, initiated the largest position in OneMain Holdings Inc (NYSE:OMF). Brigade Capital had $11.2 million invested in the company at the end of the quarter. George Soros’s Soros Fund Management also made a $8.9 million investment in the stock during the quarter. The other funds with brand new OMF positions are Stanley Druckenmiller’s Duquesne Capital, Principal Global Investors’s Columbus Circle Investors, and Brandon Haley’s Holocene Advisors.

As you can see these stocks had an average of 24.6 hedge funds with bullish positions and the average amount invested in these stocks was $290 million. That figure was $343 million in OMF’s case. Kohl’s Corporation (NYSE:KSS) is the most popular stock in this table. On the other hand AVITA Therapeutics, Inc. (NASDAQ:RCEL) is the least popular one with only 2 bullish hedge fund positions. OneMain Holdings Inc (NYSE:OMF) is not the most popular stock in this group but hedge fund interest is still above average. Our overall hedge fund sentiment score for OMF is 80.2. Stocks with higher number of hedge fund positions relative to other stocks as well as relative to their historical range receive a higher sentiment score. Our calculations showed that top 10 most popular stocks among hedge funds returned 41.4% in 2019 and outperformed the S&P 500 ETF (SPY) by 10.1 percentage points. These stocks gained 33% in 2020 through the end of August and still beat the market by 23.2 percentage points. Hedge funds were also right about betting on OMF as the stock returned 27.8% since Q2 and outperformed the market. Hedge funds were rewarded for their relative bullishness.

Is OMF A Good Investment Right Now?Is OMF A Good Stock To Buy?NYSE:OMFSentiment Score Between 80 and 90Yahoo Finance

Hedge Funds Have Never Been This Bullish On Exelixis, Inc. (EXEL)
Monthly Newsletter Strategy
Download a free copy of our newsletter and see the details inside!
Hedge Fund Resource Center
Related News
Hedge Funds Are Crazy About Sarepta Therapeutics Inc (SRPT) Hedge Funds Are Dipping Their Toes Back Into W.R. Grace & Co. (GRA) Hedge Funds Have Never Been This Bullish On RealPage, Inc. (RP) Hedge Funds Are Coming Back To The Hershey Company (HSY) Should I Buy Tapestry, Inc. (TPR)? Is Colfax Corporation (CFX) A Good Stock To Buy? Hedge Funds Keep Buying Cimarex Energy Co (XEC) 11 Largest Beer Companies in The World in 2020 10 Most Hated Companies in America in 2020 14 Countries That Produce the Most Titanium in the World
Billionaire Hedge Funds