Hedge Funds Are Coming Back To Century Communities, Inc (CCS)

How do you pick the next stock to invest in? One way would be to spend days of research browsing through thousands of publicly traded companies. However, an easier way is to look at the stocks that smart money investors are collectively bullish on. Hedge funds and other institutional investors usually invest large amounts of capital and have to conduct due diligence while choosing their next pick. They don’t always get it right, but, on average, their stock picks historically generated strong returns after adjusting for known risk factors. With this in mind, let’s take a look at the recent hedge fund activity surrounding Century Communities, Inc (NYSE:CCS) and determine whether hedge funds had an edge regarding this stock.

Is Century Communities, Inc (NYSE:CCS) a buy, sell, or hold? Money managers were becoming more confident. The number of long hedge fund positions advanced by 4 recently. Century Communities, Inc (NYSE:CCS) was in 21 hedge funds’ portfolios at the end of the second quarter of 2020. The all time high for this statistics is 24. Our calculations also showed that CCS isn’t among the 30 most popular stocks among hedge funds (click for Q2 rankings and see the video for a quick look at the top 5 stocks). There were 17 hedge funds in our database with CCS positions at the end of the first quarter.

If you’d ask most investors, hedge funds are perceived as underperforming, old investment vehicles of years past. While there are greater than 8000 funds with their doors open at present, Our experts look at the top tier of this group, approximately 850 funds. It is estimated that this group of investors orchestrate most of all hedge funds’ total capital, and by keeping an eye on their first-class picks, Insider Monkey has deciphered several investment strategies that have historically outrun the broader indices. Insider Monkey’s flagship short hedge fund strategy outperformed the S&P 500 short ETFs by around 20 percentage points annually since its inception in March 2017. Our portfolio of short stocks lost 34% since February 2017 (through August 17th) even though the market was up 53% during the same period. We just shared a list of 8 short targets in our latest quarterly update .

At Insider Monkey we scour multiple sources to uncover the next great investment idea. For example, Federal Reserve has been creating trillions of dollars electronically to keep the interest rates near zero. We believe this will lead to inflation and boost precious metals prices. So, we are checking out this junior gold mining stock. We are also checking out this lithium company which could benefit from the electric car adoption. We go through lists like the 10 most profitable companies in the world to pick the best large-cap stocks to buy. Even though we recommend positions in only a tiny fraction of the companies we analyze, we check out as many stocks as we can. We read hedge fund investor letters and listen to stock pitches at hedge fund conferences. You can subscribe to our free daily newsletter on our website to get excerpts of these letters in your inbox. Now let’s go over the key hedge fund action surrounding Century Communities, Inc (NYSE:CCS).

Heading into the third quarter of 2020, a total of 21 of the hedge funds tracked by Insider Monkey were bullish on this stock, a change of 24% from the first quarter of 2020. On the other hand, there were a total of 17 hedge funds with a bullish position in CCS a year ago. With the smart money’s positions undergoing their usual ebb and flow, there exists a select group of notable hedge fund managers who were upping their holdings meaningfully (or already accumulated large positions). 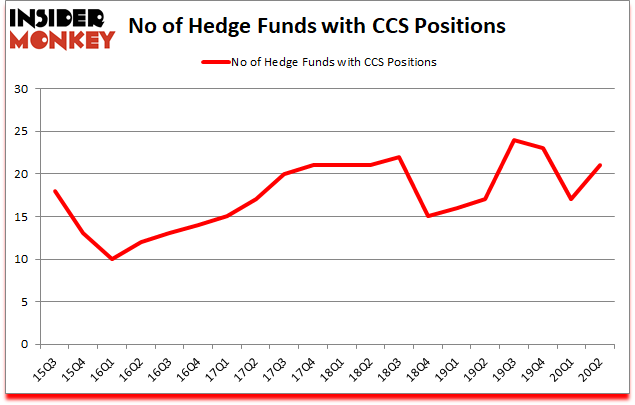 More specifically, Oaktree Capital Management was the largest shareholder of Century Communities, Inc (NYSE:CCS), with a stake worth $41.9 million reported as of the end of September. Trailing Oaktree Capital Management was Basswood Capital, which amassed a stake valued at $28.5 million. Balyasny Asset Management, Atika Capital, and Royce & Associates were also very fond of the stock, becoming one of the largest hedge fund holders of the company. In terms of the portfolio weights assigned to each position Gratia Capital allocated the biggest weight to Century Communities, Inc (NYSE:CCS), around 2.84% of its 13F portfolio. Basswood Capital is also relatively very bullish on the stock, designating 2.73 percent of its 13F equity portfolio to CCS.

As industrywide interest jumped, specific money managers were breaking ground themselves. ACK Asset Management, managed by Richard S. Meisenberg, established the most outsized position in Century Communities, Inc (NYSE:CCS). ACK Asset Management had $5 million invested in the company at the end of the quarter. Richard Driehaus’s Driehaus Capital also made a $4.6 million investment in the stock during the quarter. The other funds with new positions in the stock are Travis Cocke’s Voss Capital, Ken Grossman and Glen Schneider’s SG Capital Management, and Steve Pei’s Gratia Capital.

As you can see these stocks had an average of 18.3 hedge funds with bullish positions and the average amount invested in these stocks was $104 million. That figure was $131 million in CCS’s case. Avaya Holdings Corp. (NYSE:AVYA) is the most popular stock in this table. On the other hand Arbor Realty Trust, Inc. (NYSE:ABR) is the least popular one with only 6 bullish hedge fund positions. Century Communities, Inc (NYSE:CCS) is not the most popular stock in this group but hedge fund interest is still above average. Our overall hedge fund sentiment score for CCS is 62. Stocks with higher number of hedge fund positions relative to other stocks as well as relative to their historical range receive a higher sentiment score. Our calculations showed that top 10 most popular stocks among hedge funds returned 41.4% in 2019 and outperformed the S&P 500 ETF (SPY) by 10.1 percentage points. These stocks gained 24.8% in 2020 through the end of third quarter and still beat the market by 19.3 percentage points. Hedge funds were also right about betting on CCS as the stock returned 38.1% during Q3 and outperformed the market. Hedge funds were rewarded for their relative bullishness.

Is CCS A Good Investment Right Now?Is CCS A Good Stock To Buy?NYSE:CCSSentiment Score Between 60 and 70Yahoo Finance

Related Insider Monkey Articles
IAA Inc (IAA) Has Risen 31% in Last One Year, Outperforms MarketCalumet Specialty Products (CLMT) Has Fallen 17% in Last One Year, Underperforms...Why The Outcome Of The Election May Not Matter For Fannie Mae
Letter from the Value Investing Mental Asylum or How I Embraced StoicsBest Ivy League Schools Ranked By SelectivityCannae Holdings (CNNE) Has Risen 35% in Last One Year, Outperforms Market
Monthly Newsletter Strategy
Download a free copy of our newsletter and see the details inside!
Hedge Fund Resource Center
Billionaire Hedge Funds