Hedge Funds Are Cashing Out Of Norfolk Southern Corp. (NSC)

At the end of February we announced the arrival of the first US recession since 2009 and we predicted that the market will decline by at least 20% in (Recession is Imminent: We Need A Travel Ban NOW). In these volatile markets we scrutinize hedge fund filings to get a reading on which direction each stock might be going. In this article, we will take a closer look at hedge fund sentiment towards Norfolk Southern Corp. (NYSE:NSC).

Is Norfolk Southern Corp. (NYSE:NSC) a buy, sell, or hold? Money managers are taking a pessimistic view. The number of bullish hedge fund positions decreased by 1 recently. Our calculations also showed that NSC isn’t among the 30 most popular stocks among hedge funds (click for Q1 rankings and see the video for a quick look at the top 5 stocks). NSC was in 51 hedge funds’ portfolios at the end of March. There were 52 hedge funds in our database with NSC holdings at the end of the previous quarter.

Today there are a lot of formulas shareholders can use to grade publicly traded companies. A couple of the most useful formulas are hedge fund and insider trading sentiment. Our researchers have shown that, historically, those who follow the top picks of the top fund managers can outpace their index-focused peers by a healthy amount (see the details here).

At Insider Monkey we leave no stone unturned when looking for the next great investment idea. For example, we are still not out of the woods in terms of the coronavirus pandemic. So, we checked out this successful trader’s “corona catalyst plays“. Also, Europe is set to become the world’s largest cannabis market, so we checked out this European marijuana stock pitch. We read hedge fund investor letters and listen to stock pitches at hedge fund conferences. Our best call in 2020 was shorting the market when the S&P 500 was trading at 3150 after realizing the coronavirus pandemic’s significance before most investors. Keeping this in mind we’re going to take a look at the new hedge fund action regarding Norfolk Southern Corp. (NYSE:NSC).

At the end of the first quarter, a total of 51 of the hedge funds tracked by Insider Monkey held long positions in this stock, a change of -2% from the fourth quarter of 2019. On the other hand, there were a total of 47 hedge funds with a bullish position in NSC a year ago. With the smart money’s capital changing hands, there exists a few noteworthy hedge fund managers who were increasing their holdings meaningfully (or already accumulated large positions). 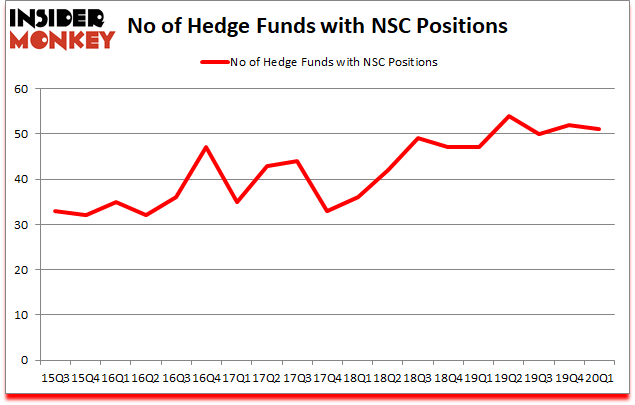 The largest stake in Norfolk Southern Corp. (NYSE:NSC) was held by Viking Global, which reported holding $258.1 million worth of stock at the end of September. It was followed by Soroban Capital Partners with a $160.4 million position. Other investors bullish on the company included Palestra Capital Management, Suvretta Capital Management, and Corvex Capital. In terms of the portfolio weights assigned to each position Lodge Hill Capital allocated the biggest weight to Norfolk Southern Corp. (NYSE:NSC), around 5.34% of its 13F portfolio. Jade Capital Advisors is also relatively very bullish on the stock, designating 4.14 percent of its 13F equity portfolio to NSC.

Since Norfolk Southern Corp. (NYSE:NSC) has witnessed declining sentiment from the entirety of the hedge funds we track, logic holds that there lies a certain “tier” of hedge funds who sold off their full holdings in the third quarter. Interestingly, Robert Pitts’s Steadfast Capital Management dropped the biggest investment of all the hedgies monitored by Insider Monkey, totaling about $93.2 million in stock. Zach Schreiber’s fund, Point State Capital, also said goodbye to its stock, about $41.1 million worth. These transactions are interesting, as aggregate hedge fund interest dropped by 1 funds in the third quarter.

As you can see these stocks had an average of 20 hedge funds with bullish positions and the average amount invested in these stocks was $526 million. That figure was $1173 million in NSC’s case. Newmont Mining Corp (NYSE:NEM) is the most popular stock in this table. On the other hand ABB Ltd (NYSE:ABB) is the least popular one with only 10 bullish hedge fund positions. Compared to these stocks Norfolk Southern Corp. (NYSE:NSC) is more popular among hedge funds. Our calculations showed that top 10 most popular stocks among hedge funds returned 41.4% in 2019 and outperformed the S&P 500 ETF (SPY) by 10.1 percentage points. These stocks gained 7.9% in 2020 through May 22nd but still managed to beat the market by 15.6 percentage points. Hedge funds were also right about betting on NSC, though not to the same extent, as the stock returned 18.1% in Q2 (through May 22nd) and outperformed the market as well.

How Hedge Funds Traded Soligenix, Inc. (SNGX) During The Crash

Hedge Funds Are Cashing Out Of RigNet Inc (RNET)