We at Insider Monkey have gone over 700 13F filings that hedge funds and prominent investors are required to file by the SEC The 13F filings show the funds’ and investors’ portfolio positions as of September 30th. In this article, we look at what those funds think of Zimmer Biomet Holdings Inc (NYSE:ZBH) based on that data.

How have hedgies been trading Zimmer Biomet Holdings Inc (NYSE:ZBH)?

At Q3’s end, a total of 40 of the hedge funds tracked by Insider Monkey held long positions in this stock, a change of 14% from the second quarter of 2018. Below, you can check out the change in hedge fund sentiment towards ZBH over the last 13 quarters. So, let’s review which hedge funds were among the top holders of the stock and which hedge funds were making big moves. 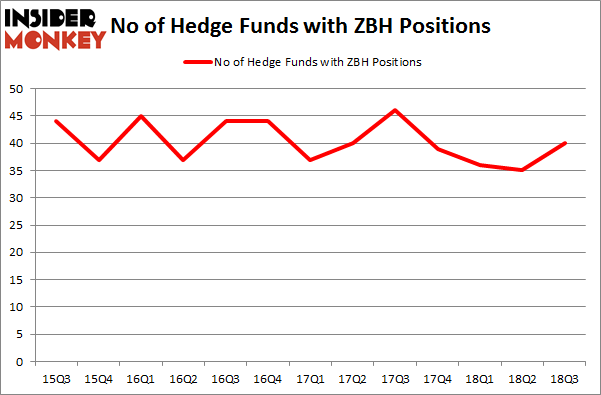 More specifically, JANA Partners was the largest shareholder of Zimmer Biomet Holdings Inc (NYSE:ZBH), with a stake worth $320.9 million reported as of the end of September. Trailing JANA Partners was Healthcor Management LP, which amassed a stake valued at $279.4 million. Millennium Management, Ariel Investments, and Partner Fund Management were also very fond of the stock, giving the stock large weights in their portfolios.

As you can see these stocks had an average of 26.5 hedge funds with bullish positions and the average amount invested in these stocks was $1.15 billion. That figure was $1.60 billion in ZBH’s case. McKesson Corporation (NYSE:MCK) is the most popular stock in this table. On the other hand T. Rowe Price Group, Inc. (NASDAQ:TROW) is the least popular one with only 17 bullish hedge fund positions. Zimmer Biomet Holdings Inc (NYSE:ZBH) is not the most popular stock in this group but hedge fund interest is still above average. This is a slightly positive signal but we’d rather spend our time researching stocks that hedge funds are piling on. In this regard MCK might be a better candidate to consider a long position.