We at Insider Monkey have gone over 700 13F filings that hedge funds and prominent investors are required to file by the SEC The 13F filings show the funds’ and investors’ portfolio positions as of September 30th. In this article, we look at what those funds think of WMIH Corp (NASDAQ:WMIH) based on that data.

WMIH Corp (NASDAQ:WMIH) was in 31 hedge funds’ portfolios at the end of the third quarter of 2018. WMIH has experienced an increase in enthusiasm from smart money of late. There were 18 hedge funds in our database with WMIH holdings at the end of the previous quarter. Our calculations also showed that WMIH isn’t among the 30 most popular stocks among hedge funds.

What does the smart money think about WMIH Corp (NASDAQ:WMIH)?

At Q3’s end, a total of 31 of the hedge funds tracked by Insider Monkey were bullish on this stock, a change of 72% from the previous quarter. On the other hand, there were a total of 19 hedge funds with a bullish position in WMIH at the beginning of this year. With the smart money’s positions undergoing their usual ebb and flow, there exists a few notable hedge fund managers who were increasing their holdings substantially (or already accumulated large positions). 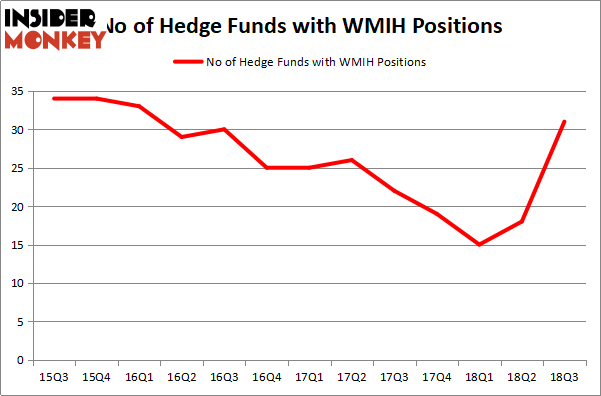 Among these funds, Diamond Hill Capital held the most valuable stake in WMIH Corp (NASDAQ:WMIH), which was worth $112.6 million at the end of the third quarter. On the second spot was Greywolf Capital Management which amassed $90.1 million worth of shares. Moreover, Appaloosa Management LP, Rubric Capital Management, and Serengeti Asset Management were also bullish on WMIH Corp (NASDAQ:WMIH), allocating a large percentage of their portfolios to this stock.

As you can see these stocks had an average of 6.25 hedge funds with bullish positions and the average amount invested in these stocks was $41 million. That figure was $568 million in WMIH’s case. Knowles Corp (NYSE:KN) is the most popular stock in this table. On the other hand Grupo Simec S.A.B. de C.V. (NYSEAMEX:SIM) is the least popular one with only 1 bullish hedge fund positions. Compared to these stocks WMIH Corp (NASDAQ:WMIH) is more popular among hedge funds. Considering that hedge funds are fond of this stock in relation to its market cap peers, it may be a good idea to analyze it in detail and potentially include it in your portfolio.