Although the masses and most of the financial media blame hedge funds for their exorbitant fee structure and disappointing performance, these investors have been proven to have great stock picking abilities over the years (that’s why their assets under management continue to swell). We believe hedge fund sentiment should serve as a crucial tool of an individual investor’s stock selection process, as it may offer great insights of how the brightest minds of the finance industry feel about specific stocks. After all, these people have access to smartest analysts and expensive data/information sources that individual investors can’t match. So should one consider investing in United Technologies Corporation (NYSE:UTX)? The smart money sentiment can provide an answer to this question.

The smart money is very confident in United Technologies Corporation (NYSE:UTX) right now. The number of hedge funds long the stock jumped to 59 at the end of Q3, nearly 50% more than there were 18 months earlier. One of the company’s biggest bulls remains billionaire Bill Ackman, who is confident the company will eventually decide to break up, which Ackman has been trying to push for some time.

“UTX has continued studying a business separation, and has committed to announcing a decision as soon as the company closes the Rockwell deal. Based on management’s recent comments, we believe that the company has all but confirmed that it will execute a breakup for which shareholders are highly supportive, particularly in light of GE’s recent woes,” Ackman stated in Pershing Square’s Q3 investor letter. 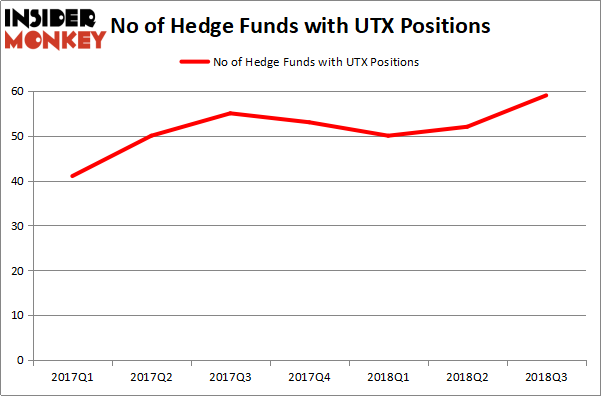 Among these funds, Dan Loeb’s Third Point held the most valuable stake in United Technologies Corporation (NYSE:UTX), which was worth $1.17 billion at the end of the second quarter. On the second spot was Viking Global which amassed $823.4 million worth of shares. Moreover, Bill Ackman’s Pershing Square, Ken Fisher’s Fisher Asset Management, and First Pacific Advisors LLC were also bullish on United Technologies Corporation (NYSE:UTX), allocating a large percentage of their portfolios to this stock.

With general bullishness amongst the heavyweights, key hedge funds were breaking ground themselves. HBK Investments, managed by David Costen Haley, established the largest call position in United Technologies Corporation (NYSE:UTX). HBK Investments had $139.8 million invested in the company at the end of the quarter. Anthony Bozza’s Lakewood Capital Management also made a $86.8 million investment in the stock during the quarter. The other funds with brand new UTX positions are Andy Redleaf’s Whitebox Advisors, Israel Englander’s Millennium Management, and Gregg Moskowitz’s Interval Partners.

Let’s go over hedge fund activity in other stocks – not necessarily in the same industry as United Technologies Corporation (NYSE:UTX) but similarly valued. We will take a look at Sanofi (ADR) (NYSE:SNY), The Toronto-Dominion Bank (USA) (NYSE:TD), Accenture Plc (NYSE:ACN), and British American Tobacco PLC (ADR) (NYSEAMEX:BTI). This group of stocks’ market valuations are similar to UTX’s market valuation.

As you can see these stocks had an average of 23 hedge funds with bullish positions and the average amount invested in these stocks was $851 million. That figure was $7.28 billion in UTX’s case. Accenture Plc (NYSE:ACN) is the most popular stock in this table. On the other hand British American Tobacco PLC (ADR) (NYSEAMEX:BTI) is the least popular one with only 15 bullish hedge fund positions. Compared to these stocks United Technologies Corporation (NYSE:UTX) is more popular among hedge funds. Considering that hedge funds are extremely fond of this stock in relation to its market cap peers and growing ever more bullish, it may be a good idea to analyze it in detail and potentially include it in your portfolio.