A whopping number of 13F filings filed with U.S. Securities and Exchange Commission has been processed by Insider Monkey so that individual investors can look at the overall hedge fund sentiment towards the stocks included in their watchlists. These freshly-submitted public filings disclose money managers’ equity positions as of the end of the three-month period that ended September 30, so let’s proceed with the discussion of the hedge fund sentiment on Trex Company Inc (NYSE:TREX).

Is Trex Company Inc (NYSE:TREX) ready to rally soon? Money managers are definitely becoming hopeful. The number of bullish hedge fund bets that are revealed through the 13F filings rose by 3 in recent months. There were 10 hedge funds in our database with TREX positions at the end of September. At the end of this article we will also compare TREX to other stocks including Viavi Solutions Inc (NASDAQ:VIAV), Nelnet, Inc. (NYSE:NNI), and Herman Miller, Inc. (NASDAQ:MLHR) to get a better sense of its popularity.

How have hedgies been trading Trex Company Inc (NYSE:TREX)?

Heading into the fourth quarter of 2016, a total of 10 of the hedge funds tracked by Insider Monkey were long this stock, up by 43% from the previous quarter. Below, you can check out the change in hedge fund sentiment towards TREX over the last 5 quarters. So, let’s find out which hedge funds were among the top holders of the stock and which hedge funds were making big moves. 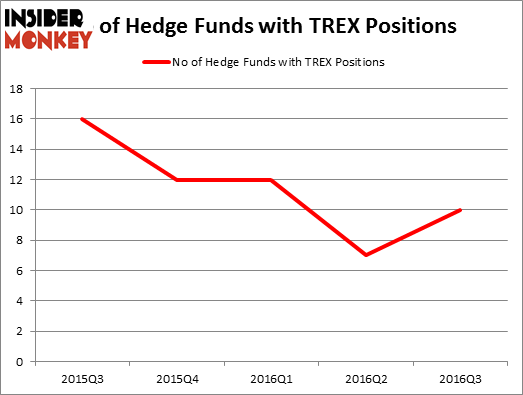 According to publicly available hedge fund and institutional investor holdings data compiled by Insider Monkey, Renaissance Technologies, one of the largest hedge funds in the world, has the biggest position in Trex Company Inc (NYSE:TREX), worth close to $8.9 million. The second largest stake is held by Peter Muller of PDT Partners which holds a $2.8 million position. Other peers with similar optimism comprise Bernard Horn’s Polaris Capital Management, and John Osterweis’ Osterweis Capital Management. We should note that none of these hedge funds are among our list of the 100 best performing hedge funds which is based on the performance of their 13F long positions in non-microcap stocks.