Is SPX Corporation (NYSE:SPXC) a good investment right now? We check hedge fund and billionaire investor sentiment before delving into hours of research. Hedge funds spend millions of dollars on Ivy League graduates, expert networks, and get tips from industry insiders. They sometimes fail miserably but historically their consensus stock picks outperformed the market after adjusting for known risk factors.

For the first time in 7 quarters, there was net buying of SPX Corporation (NYSE:SPXC) among the hedge funds tracked by our database. Despite the small boost in ownership during Q3, fewer than half as many hedge funds own the stock as did 3 years ago. Jay Petschek and Steven Major’s Corsair Capital Management is one of the 11 funds bullish on SPXC, and shared why in its Q2 investor letter:

“SPX Corp. (“SPXC”) shares rose 8% in the period, driven by a solid first quarter beat and an accretive acquisition announcement. The company closed on the purchase of CUES, an underground pipe inspection business which complements SPXC’s Radiodetection location services business. SPXC also increased its 2018 EPS guidance range to $2.15-$2.25; however, excluding purchase-accounting deal amortization, 2018 guidance would be closer to $2.40 according to management. We believe that in 2019, with a full year of benefit from the CUES acquisition and the associated deal synergies, the company will earn $2.80 per share and have a clear path to our 2020 EPS estimate of $3.25. We target a $60 stock price in 12-18 months, and expect management to pull levers to unlock shareholder value including stock buybacks and a potential spinoff. SPXC ended the second quarter with a stock price of $35.09,” the fund wrote in its investor letter.

In the 21st century investor’s toolkit there are a lot of tools stock market investors employ to evaluate stocks. A duo of the less known tools are hedge fund and insider trading activity. Our researchers have shown that, historically, those who follow the top picks of the top investment managers can outclass the broader indices by a superb margin (see the details here). 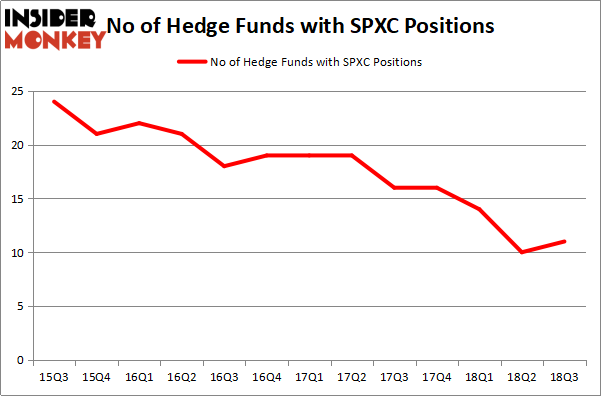 More specifically, Selz Capital was the largest shareholder of SPX Corporation (NYSE:SPXC), with a stake worth $35.3 million reported as of the end of September. Trailing Selz Capital was Corsair Capital Management, which amassed a stake valued at $26.7 million. D E Shaw, Ancora Advisors, and AQR Capital Management were also very fond of the stock, giving the stock large weights in their portfolios.

As one would reasonably expect, key money managers were breaking ground themselves. Marshall Wace LLP, managed by Paul Marshall and Ian Wace, established the most outsized position in SPX Corporation (NYSE:SPXC). Marshall Wace LLP had $1.4 million invested in the company at the end of the quarter. Ken Griffin’s Citadel Investment Group also initiated a $0.3 million position during the quarter.

As you can see these stocks had an average of 21 hedge funds with bullish positions and the average amount invested in these stocks was $366 million. That figure was $115 million in SPXC’s case. Warrior Met Coal, Inc. (NYSE:HCC) is the most popular stock in this table. On the other hand Cooper Tire & Rubber Company (NYSE:CTB) is the least popular one with only 10 bullish hedge fund positions. SPX Corporation (NYSE:SPXC) is not the least popular stock in this group but hedge fund interest is still below average and has been extremely poor for 2 years. This is a slightly negative signal and we’d rather spend our time researching stocks that hedge funds are piling on, like HCC.