The 700+ hedge funds and money managers tracked by Insider Monkey have already compiled and submitted their 13F filings for the second quarter, which unveil their equity positions as of September 30. We went through these filings, fixed typos and other more significant errors and identified the changes in hedge fund positions. Our extensive review of these public filings is finally over, so this article is set to reveal the smart money sentiment towards Shake Shack Inc (NYSE:SHAK).

Shake Shack Inc (NYSE:SHAK) shareholders have witnessed an increase in hedge fund sentiment of late. Our calculations also showed that SHAK isn’t among the 30 most popular stocks among hedge funds.

What have hedge funds been doing with Shake Shack Inc (NYSE:SHAK)?

Heading into the fourth quarter of 2018, a total of 22 of the hedge funds tracked by Insider Monkey were long this stock, a change of 5% from one quarter earlier. On the other hand, there were a total of 14 hedge funds with a bullish position in SHAK at the beginning of this year. With the smart money’s capital changing hands, there exists an “upper tier” of notable hedge fund managers who were adding to their holdings considerably (or already accumulated large positions). 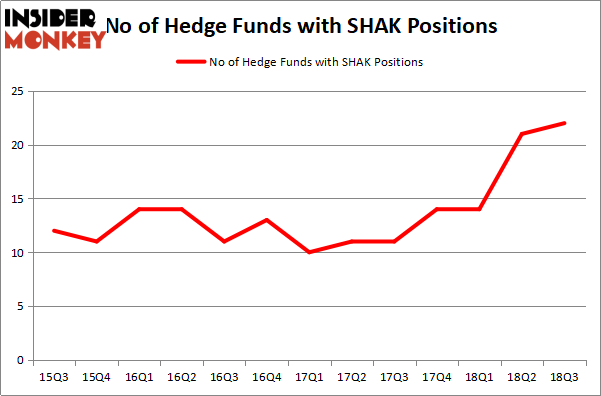 As one would reasonably expect, key hedge funds were leading the bulls’ herd. Element Capital Management, managed by Jeffrey Talpins, established the most outsized position in Shake Shack Inc (NYSE:SHAK). Element Capital Management had $4.6 million invested in the company at the end of the quarter. Sander Gerber’s Hudson Bay Capital Management also initiated a $1.3 million position during the quarter. The other funds with new positions in the stock are Paul Tudor Jones’s Tudor Investment Corp and David Andre and Astro Teller’s Cerebellum Capital.

As you can see these stocks had an average of 19.5 hedge funds with bullish positions and the average amount invested in these stocks was $425 million. That figure was $294 million in SHAK’s case. Patterson Companies, Inc. (NASDAQ:PDCO) is the most popular stock in this table. On the other hand Pacific Premier Bancorp, Inc. (NASDAQ:PPBI) is the least popular one with only 9 bullish hedge fund positions. Shake Shack Inc (NYSE:SHAK) is not the most popular stock in this group but hedge fund interest is still above average. This is a slightly positive signal but we’d rather spend our time researching stocks that hedge funds are piling on. In this regard PDCO might be a better candidate to consider a long position.