Hedge fund managers like David Einhorn, Dan Loeb, or Carl Icahn became billionaires through reaping large profits for their investors, which is why piggybacking their stock picks may provide us with significant returns as well. Many hedge funds, like Paul Singer’s Elliott Management, are pretty secretive, but we can still get some insights by analyzing their quarterly 13F filings. One of the most fertile grounds for large abnormal returns is hedge funds’ most popular small-cap picks, which are not so widely followed and often trade at a discount to their intrinsic value. In this article we will check out hedge fund activity in another small-cap stock: PGT Innovations Inc. (NYSE:PGTI).

Is PGT Innovations Inc. (NYSE:PGTI) going to take off soon? Investors who are in the know are betting on the stock. The number of long hedge fund bets went up by 2 lately. Our calculations also showed that PGTI isn’t among the 30 most popular stocks among hedge funds.

What have hedge funds been doing with PGT Innovations Inc. (NYSE:PGTI)?

At the end of the third quarter, a total of 22 of the hedge funds tracked by Insider Monkey were bullish on this stock, a change of 10% from the previous quarter. The graph below displays the number of hedge funds with bullish position in PGTI over the last 13 quarters. With hedge funds’ positions undergoing their usual ebb and flow, there exists a select group of noteworthy hedge fund managers who were upping their holdings considerably (or already accumulated large positions). 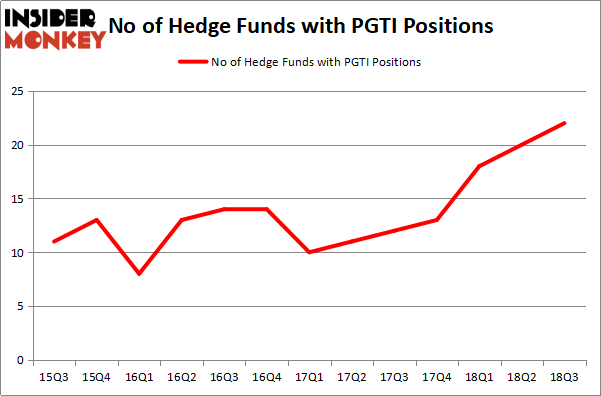 Among these funds, Renaissance Technologies held the most valuable stake in PGT Innovations Inc. (NYSE:PGTI), which was worth $86.3 million at the end of the third quarter. On the second spot was Royce & Associates which amassed $8.1 million worth of shares. Moreover, Driehaus Capital, Citadel Investment Group, and Laurion Capital Management were also bullish on PGT Innovations Inc. (NYSE:PGTI), allocating a large percentage of their portfolios to this stock.

As you can see these stocks had an average of 10.25 hedge funds with bullish positions and the average amount invested in these stocks was $62 million. That figure was $146 million in PGTI’s case. SUPERVALU INC. (NYSE:SVU) is the most popular stock in this table. On the other hand AllianzGI NFJ Dividend, Interest & Premium Strategy Fund (NYSE:NFJ) is the least popular one with only 4 bullish hedge fund positions. Compared to these stocks PGT Innovations Inc. (NYSE:PGTI) is more popular among hedge funds. Considering that hedge funds are fond of this stock in relation to its market cap peers, it may be a good idea to analyze it in detail and potentially include it in your portfolio.

Should You Buy Cott Corporation (COT)?
Monthly Newsletter Strategy
Download a free copy of our newsletter and see the details inside!
Hedge Fund Resource Center
Related News
Should You Buy PGT, Inc. (PGTI)? Find Out What Hedge Funds Have To Say Should You Avoid PGT, Inc. (PGTI)? Five Reasons You Need a Day-Trading Mentor 15 Most Important Medical Discoveries of 2018 The 10 Best Islands to Visit in 2019
Billionaire Hedge Funds