News Corp (NASDAQ:NWSA) shareholders have witnessed an increase in hedge fund interest in recent months. Our calculations also showed that NWSA isn’t among the 30 most popular stocks among hedge funds.

At the end of the third quarter, a total of 30 of the hedge funds tracked by Insider Monkey held long positions in this stock, a change of 20% from the second quarter of 2018. The graph below displays the number of hedge funds with bullish position in NWSA over the last 13 quarters. So, let’s examine which hedge funds were among the top holders of the stock and which hedge funds were making big moves. 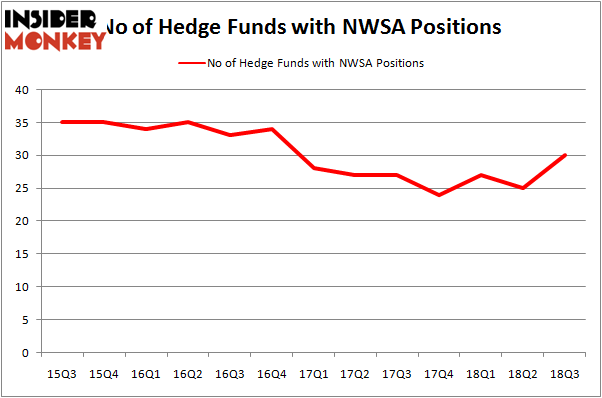 More specifically, Pzena Investment Management was the largest shareholder of News Corp (NASDAQ:NWSA), with a stake worth $297.3 million reported as of the end of September. Trailing Pzena Investment Management was International Value Advisers, which amassed a stake valued at $164.4 million. D E Shaw, AQR Capital Management, and Tensile Capital were also very fond of the stock, giving the stock large weights in their portfolios.

As you can see these stocks had an average of 24.5 hedge funds with bullish positions and the average amount invested in these stocks was $552 million. That figure was $712 million in NWSA’s case. Okta, Inc. (NASDAQ:OKTA) is the most popular stock in this table. On the other hand Lamar Advertising Company (REIT) (NASDAQ:LAMR) is the least popular one with only 19 bullish hedge fund positions. News Corp (NASDAQ:NWSA) is not the most popular stock in this group but hedge fund interest is still above average. This is a slightly positive signal but we’d rather spend our time researching stocks that hedge funds are piling on. In this regard OKTA might be a better candidate to consider a long position.

Is Keysight Technologies Inc (KEYS) A Good Stock To Buy?
Monthly Newsletter Strategy
Download a free copy of our newsletter and see the details inside!
Hedge Fund Resource Center
Related News
11 Worst Tech Mergers and Acquisitions Ever 6 Corporations Who Own 90% Of The News Media Is News Corp (NWSA) a Good Stock To Buy? Did Altalis Capital Partners Make The Right Move Cutting Exposure To News Corp (NWSA), DISH Network Corp (DISH) & Two Other Stocks? 10 Most Successful Immigrants in USA and Their Companies News Corp (NWSA): Are Hedge Funds Right About This Stock? Charles De Vaulx Is Not Giving Up On DeVry Education Group Inc (DV), Other Top Value Picks Despite Losses The 10 Best Islands to Visit in 2019 5 Most Socially Responsible Companies in America 5 Ways You Can Eliminate Credit Card Debt
Billionaire Hedge Funds