NCI Building Systems, Inc. (NYSE:NCS) has seen an increase in enthusiasm from smart money of late. NCS was in 28 hedge funds’ portfolios at the end of September. There were 18 hedge funds in our database with NCS holdings at the end of the previous quarter. Our calculations also showed that NCS isn’t among the 30 most popular stocks among hedge funds.

At Q3’s end, a total of 28 of the hedge funds tracked by Insider Monkey were bullish on this stock, a change of 56% from one quarter earlier. Below, you can check out the change in hedge fund sentiment towards NCS over the last 13 quarters. With hedge funds’ positions undergoing their usual ebb and flow, there exists an “upper tier” of key hedge fund managers who were increasing their stakes considerably (or already accumulated large positions). 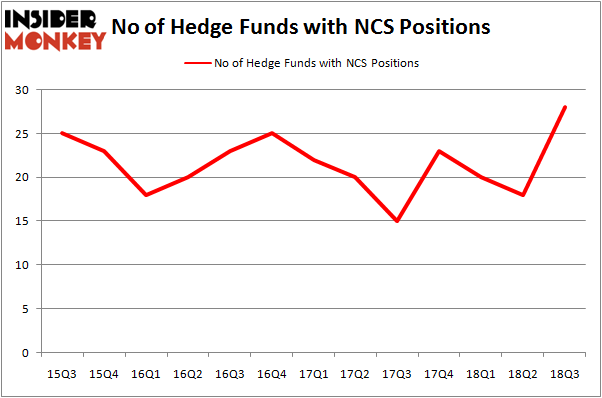 Among these funds, Renaissance Technologies held the most valuable stake in NCI Building Systems, Inc. (NYSE:NCS), which was worth $43.3 million at the end of the third quarter. On the second spot was Millennium Management which amassed $17.8 million worth of shares. Moreover, AQR Capital Management, Royce & Associates, and Rutabaga Capital Management were also bullish on NCI Building Systems, Inc. (NYSE:NCS), allocating a large percentage of their portfolios to this stock.

As industrywide interest jumped, specific money managers were leading the bulls’ herd. Marshall Wace LLP, managed by Paul Marshall and Ian Wace, created the largest position in NCI Building Systems, Inc. (NYSE:NCS). Marshall Wace LLP had $6.5 million invested in the company at the end of the quarter. Bradley LouisáRadoff’s Fondren Management also made a $1.7 million investment in the stock during the quarter. The other funds with new positions in the stock are Joel Greenblatt’s Gotham Asset Management, Peter Rathjens, Bruce Clarke and John Campbell’s Arrowstreet Capital, and Peter Algert and Kevin Coldiron’s Algert Coldiron Investors.

As you can see these stocks had an average of 10 hedge funds with bullish positions and the average amount invested in these stocks was $106 million. That figure was $151 million in NCS’s case. Apellis Pharmaceuticals, Inc. (NASDAQ:APLS) is the most popular stock in this table. On the other hand Douglas Dynamics Inc (NYSE:PLOW) is the least popular one with only 6 bullish hedge fund positions. Compared to these stocks NCI Building Systems, Inc. (NYSE:NCS) is more popular among hedge funds. Considering that hedge funds are fond of this stock in relation to its market cap peers, it may be a good idea to analyze it in detail and potentially include it in your portfolio.