Is MyoKardia, Inc. (NASDAQ:MYOK) a good bet right now? We like to analyze hedge fund sentiment before doing days of in-depth research. We do so because hedge funds and other elite investors have numerous Ivy league graduates, expert network advisers, and supply chain tipsters working or consulting for them. There is not a shortage of news stories covering failed hedge fund investments and it is a fact that hedge funds’ picks don’t beat the market 100% of the time, but their consensus picks have historically done very well and have outperformed the market after adjusting for risk.

MyoKardia, Inc. (NASDAQ:MYOK) investors should pay attention to an increase in hedge fund sentiment in recent months. MYOK was in 22 hedge funds’ portfolios at the end of the third quarter of 2018. There were 20 hedge funds in our database with MYOK positions at the end of the previous quarter. Our calculations also showed that MYOK isn’t among the 30 most popular stocks among hedge funds.

At the end of the third quarter, a total of 22 of the hedge funds tracked by Insider Monkey were long this stock, a change of 10% from the second quarter of 2018. Below, you can check out the change in hedge fund sentiment towards MYOK over the last 13 quarters. So, let’s examine which hedge funds were among the top holders of the stock and which hedge funds were making big moves. 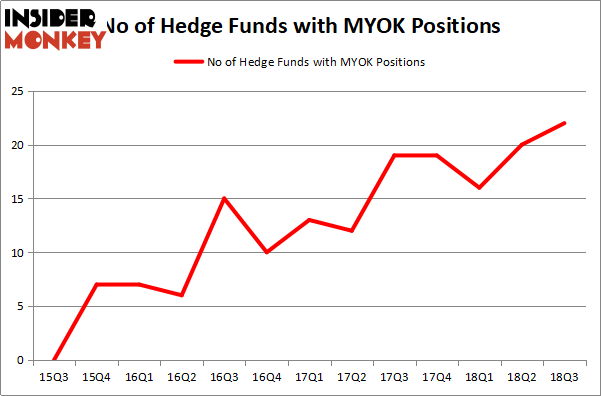 With a general bullishness amongst the heavyweights, specific money managers have jumped into MyoKardia, Inc. (NASDAQ:MYOK) headfirst. Polar Capital, managed by Brian Ashford-Russell and Tim Woolley, initiated the largest position in MyoKardia, Inc. (NASDAQ:MYOK). Polar Capital had $6 million invested in the company at the end of the quarter. Michael Platt and William Reeves’s BlueCrest Capital Mgmt. also initiated a $0.4 million position during the quarter. The only other fund with a brand new MYOK position is Jerome Pfund and Michael Sjostrom’s Sectoral Asset Management.

As you can see these stocks had an average of 11.25 hedge funds with bullish positions and the average amount invested in these stocks was $237 million. That figure was $670 million in MYOK’s case. ACADIA Pharmaceuticals Inc. (NASDAQ:ACAD) is the most popular stock in this table. On the other hand First Trust NASDAQ-100-Tech Sector ETF (NASDAQ:QTEC) is the least popular one with only 2 bullish hedge fund positions. Compared to these stocks MyoKardia, Inc. (NASDAQ:MYOK) is more popular among hedge funds. Considering that hedge funds are fond of this stock in relation to its market cap peers, it may be a good idea to analyze it in detail and potentially include it in your portfolio.